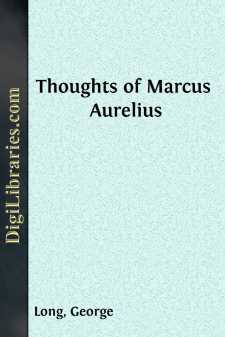 Perhaps some may question the wisdom of putting out the Thoughts of Marcus Aurelius Antoninus to be used as a Reader by children in the schools. It may appear to them better suited to the mature mind. The principle, however, that has governed us in selecting reading for the young has been to secure the best that we could find in all ages for grown-up people. The milk and water diet provided for "my dear children" is not especially complimentary to them. They like to be treated like little men and women, capable of appreciating a good thing. One finds in this royal philosopher a rare generosity, sweetness and humility, qualities alike suited to all ages.

Adopting the philosopher's robe at twelve, he remains a student all his life. The precepts that he would give for the government of others, he has practised upon himself. In his time, as in ours, there were good physicians for the mind and body, who could make wise prescriptions for the government of their neighbors, but were unable to apply them to themselves. The faults of our fellows are so numerous and so easy to cure that one is readily tempted to become the physician, while our own faults are so few and so unimportant that it is hardly worth while to give any attention to them. Hence we have a multitude of physicians for humanity in general, and a scarcity of individual healers.

It was the doctrine of Marcus Aurelius that most of the ills of life come to us from our own imagination, that it was not in the power of others seriously to interfere with the calm, temperate life of an individual, and that when a fellow being did anything to us that seemed unjust he was acting in ignorance, and that instead of stirring up anger within us it should stir our pity for him. Oftentimes by careful self-examination we should find that the fault was more our own than that of our fellow, and our sufferings were rather from our own opinions than from anything real. The circle of man's knowledge is very limited, and the largest circles do not wholly include the smallest. They are intersecting and the segment common to any two is very small. Whatever lies outside this space does not exist for both. Hence arise innumerable contests. The man having the largest intelligence ought to be very generous to the other. Being thankful that he has been blessed in so many ways, he should do all in his power to enlighten his less favored fellow, rather than be angry with him on account of his misfortune. Is he not sufficiently punished in being denied the light?

Assisting his uncle in the government of the great Roman Empire at seventeen, it was his aim constantly to restrain the power of the strong and to assist the weak. He studied the laws of his country, not for wisdom alone, but that he might make them more beneficial to his people. All his life he tried to bring his fellows to a higher level, and to think charitably of each other. Occupying himself a palace he lived simply, like other men. It was his greatest delight to retire to his country home and there, dwelling among his books, to meditate upon the great problems of life....