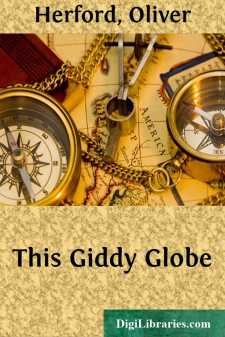 Six busy days it took in allTo make a World and plan its fall,The seventh, SOMEONE said ’twas goodAnd rested, should you think he could?Knowing what the result would beThere would have been no rest for me!Claire Beecher Kummer.

It takes much longer to write a Geography than, according to Moses, it took to create the World which it is the Geographer’s business to describe; and since the Critic has been added to the list of created beings, it is no longer the fashion for the Author to pass judgment on his own work.

Let us imagine, however, that concealed in the cargo of Hypothetic Nebula destined for the construction of the Terrestrial Globe was a Protoplasmic Stowaway that sprang to being in the shape of a Critic just as the work of Creation was finished.

Would it not be interesting to speculate upon that Critic’s reception of the freshly made World?

We may be sure that he would have found many things not to his liking; technical defects such as the treatment of grass and foliage in green instead of the proper purple; the tinting of the sky which any landscape painter will tell you would be more decorative done in turquoise green than cobalt blue.

Like the foolish Butterfly in the Talmud, who (to impress Mrs. Butterfly) stamped his tiny foot upon the dome of King Solomon’s Temple, our Critic might have declared the World “Too flimsy in construction.” He would certainly have found fault with the Solar System and the Plumbing—the absence of heat in Winter when there is the greater need of it and the paucity of moisture in the desert places where it never rains.

The comicality of the Ape family might have provoked a reluctant smile, but much more likely a lecture on the impropriety of descending to caricature in a serious work.

The Creation of Heaven & Earth in Six dayes Gen: I

At best, our Critic would have pronounced the freshly made World the work of a beginner, conceding perhaps that he “showed promise” and “might go far,” and if he wished to be very impressive indeed, he would pretend that he had penetrated the veil of Anonymity and hint darkly that he detected evident traces of a Feminine Touch!

In that, however, our Critic would only have been anticipating, for is there not at this very moment on the press a Suffrage edition (for women only) of the Rubaiyat, in which one verse is amended to read thus—

The ball no question makes of Ayes or Nos,But right or left, as strikes the Player goes,And SHE who tossed it down into the field,SHE knows about it all, SHE knows, SHE knows!

For the Reader Only

This is for you, and you only. We have concealed it between chapters one and two so that it will not meet any eye but yours.

We have a confession to make—it would be useless to attempt concealment—we have the Digression habit.

We have tried every known remedy but we fear it is incurable.

All we ask, Gentle Reader, is that when we stray too far you will favour us with a gentle reminder.