There is No Harm in Dancing 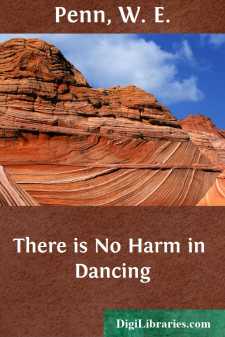 Major W.C. Penn, the author of the following treatise on the modern dance, has requested the writer to pen a few thoughts introductory to a theme he has presented with such pith and power to listening thousands in his travels as an Evangelist.

Various inquiries have been made as to how Major Penn, a lawyer in a lucrative practice, and with all the attractions of wealth and of fame before him, and in a quiet, lovely and elegant home, with a wife who has ever been as a guardian angel to his pathway, was led to change his vocation to that of a wandering Evangelist, and how it is that he now stands before the world beside Knapp, and Earle, and Moody, and other world-renowned Evangelists of the 19th century, in leading multitudes to Christ as a Savior?

It is answered and centered in the sublime truth: "The love of Christ constraineth us." As the stars are dimmed and lost sight of in the brilliancy of the rising sun, so earthly pleasures, riches and honors fade and dwindle in the glory of the Cross. As God was pleased to use the writer as an instrument in getting brother Penn into this work, so it seemed proper that a few incidents and facts which led to it, as remembered in our associations together, should be stated.

It was in Jefferson, Texas, where our brother then resided, that I first saw him, in May, 1874, during the session of the Southern Baptist Convention, at that place. But it was in June, the year after, at his own home and during a series of meetings in the Baptist Church, that I began to know more of him, as he brought up in our social interviews a review of his life religiously—as he told of the time when, in the ardor and vigor of youth, in Tennessee, at a meeting, he sought to defy and brave a gospel message from the venerable brother James Hurt, by taking a front seat; and then how his soul was convulsed and his heart melted, as God's message wrenched the bolted door of that heart; how he struggled with the agonies of conviction for sin, during the long, weary hours of night; and how the joys of pardoning love through Christ came to his soul with the brightness of the morning. As these conversations were reviewed, he told of frequent backslidings, and how far away from God he had been. Then he told of some things he had done in the Sunday School and in the Church, and then at times gave his opinion as to the best way of conducting a series of meetings and other things pertaining to Christ's Kingdom. During these conversations the question was asked: "Bro. Penn, are you satisfied and sure that you are in full discharge of your duty?" After a pause he replied, as if conscience was awakened:

"No Sir. I am not satisfied, and have not been for years past." Then said he: "You are the first man that ever asked me that question." Then the writer made known some impressions about him that must have been made by the spirit of God, for he never had just such an interest to burden his heart previously, and that was that God had a peculiar and wonderful work for him to do....