Theobald, the Iron-Hearted Love to Enemies 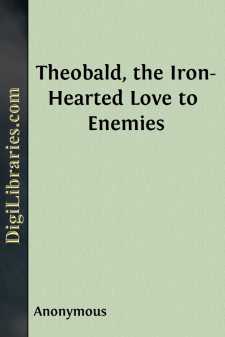 In the long and bloody war which followed the martyrdom of John Huss and Jerome of Prague, two hostile armies met, in 1423, in one of the most beautiful valleys of Bohemia.

The battle commenced towards the close of day, and continued until after sunset.

It was then that old Gottfried, accompanied by Erard, his grandson, climbed to the summit of a steep hill, from the edge of which might be perceived, in the depth of the valley, behind a wood, some troops still fighting.

The old man and the child, (Erard was scarcely nine years of age,) were sad and silent. They both looked towards the plain, and it was with a profound sigh that Erard at last said, "O, how good is the Lord, if he has preserved my father!"

"The Lord can preserve him!" said Gottfried, with solemnity, "Arnold belongs to him; yes, my son, your father is one of his dear children!"

"But, grandpapa," resumed Erard, looking at the old man, "do not Christians also die in battle? God does not preserve them all."

"If my son has laid down his life for the Lord," continued Gottfried, "he is not dead: his soul has gone from this world to be with his Saviour."

"To be with my good mamma!" said the child. "In heaven with the angels, is it not, dear grandpapa?"

"To be with thy mother, my son," replied the old man, drawing the child towards him. "Yes, in the heaven of the blessed! It is there that all those who love Jesus go, and your mother was his faithful servant."

Erard sighed, and exclaimed, "O, how good will God be if he has preserved my father, my good father! O, grandpapa, why did you let him go?"

"Erard," replied the old Christian, "your father would rather not have fought, he has so much patience and in his heart; but then he also has courage: he has been surnamed----"

"Grandpapa," interrupted the child, with agitation, and pointing with his hand towards the plain, under the declivity of the hill, and in a narrow passage between the rocks and woods, "do you see those three horsemen?"

In fact, three armed warriors were hastening, at the utmost speed of their horses, towards a thick coppice, which they entered, and disappeared. The first seemed to be flying before the two others, who appeared to be in furious pursuit.

Gottfried listened, but no sound was heard; and, a few moments afterwards, he distinctly saw two of the warriors come out of the wood and hasten towards the plain, repassing the defile.

"Alas!" said the old man, groaning, "they have killed him! They have dipped their hands in the blood of their brother!"

"They have killed him! Do you say so, grandpapa? Whom have they killed? Is it my father?"

"No, my son; the first warrior was not Arnold. But it was a man, and those are men who have killed him! O Lord, when wilt thou teach them to love one another? But let us go to him," added the old man.

"To the dead man!" exclaimed Erard with affright. "Grandpapa, see! it is already night."