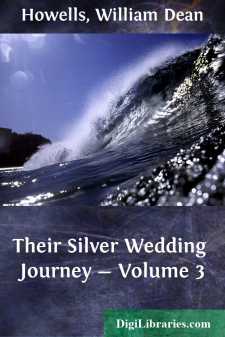 At the first station where the train stopped, a young German bowed himself into the compartment with the Marches, and so visibly resisted an impulse to smoke that March begged him to light his cigarette. In the talk which this friendly overture led to between them he explained that he was a railway architect, employed by the government on that line of road, and was travelling officially. March spoke of Nuremberg; he owned the sort of surfeit he had suffered from its excessive mediaevalism, and the young man said it was part of the new imperial patriotism to cherish the Gothic throughout Germany; no other sort of architecture was permitted in Nuremberg. But they would find enough classicism at Ansbach, he promised them, and he entered with sympathetic intelligence into their wish to see this former capital when March told him they were going to stop there, in hopes of something typical of the old disjointed Germany of the petty principalities, the little paternal despotisms now extinct.

As they talked on, partly in German and partly in English, their purpose in visiting Ansbach appeared to the Marches more meditated than it was. In fact it was somewhat accidental; Ansbach was near Nuremberg; it was not much out of the way to Holland. They took more and more credit to themselves for a reasoned and definite motive, in the light of their companion's enthusiasm for the place, and its charm began for them with the drive from the station through streets whose sentiment was both Italian and French, and where there was a yellowish cast in the gray of the architecture which was almost Mantuan. They rested their sensibilities, so bruised and fretted by Gothic angles and points, against the smooth surfaces of the prevailing classicistic facades of the houses as they passed, and when they arrived at their hotel, an old mansion of Versailles type, fronting on a long irregular square planted with pollard sycamores, they said that it might as well have been Lucca.

The archway and stairway of the hotel were draped with the Bavarian colors, and they were obscurely flattered to learn that Prince Leopold, the brother of the Prince-Regent of the kingdom, had taken rooms there, on his way to the manoeuvres at Nuremberg, and was momently expected with his suite. They realized that they were not of the princely party, however, when they were told that he had sole possession of the dining-room, and they went out to another hotel, and had their supper in keeping delightfully native. People seemed to come there to write their letters and make up their accounts, as well as to eat their suppers; they called for stationery like characters in old comedy, and the clatter of crockery and the scratching of pens went on together; and fortune offered the Marches a delicate reparation for their exclusion from their own hotel in the cold popular reception of the prince which they got back just in time to witness. A very small group of people, mostly women and boys, had gathered to see him arrive, but there was no cheering or any sign of public interest. Perhaps he personally merited none; he looked a dull, sad man, with his plain, stubbed features; and after he had mounted to his apartment, the officers of his staff stood quite across the landing, and barred the passage of the Americans, ignoring even Mrs. March's presence, as they talked together.

"Well, my dear," said her husband, "here you have it at last. This is what you've been living for, ever since we came to Germany. It's a great moment."

If she had been young, she might have withered them with a glance; she doubted now if her dim eyes would have any such power; but she advanced steadily upon them, and then the officers seemed aware of her, and stood aside.