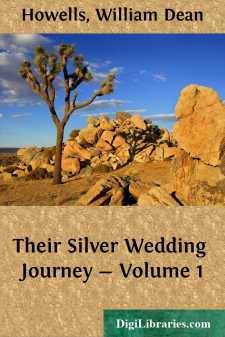 "You need the rest," said the Business End; "and your wife wants you to go, as well as your doctor. Besides, it's your Sabbatical year, and you, could send back a lot of stuff for the magazine."

"Is that your notion of a Sabbatical year?" asked the editor.

"No; I throw that out as a bait to your conscience. You needn't write a line while you're gone. I wish you wouldn't for your own sake; although every number that hasn't got you in it is a back number for me."

"That's very nice of you, Fulkerson," said the editor. "I suppose you realize that it's nine years since we took 'Every Other Week' from Dryfoos?"

"Well, that makes it all the more Sabbatical," said Fulkerson. "The two extra years that you've put in here, over and above the old style Sabbatical seven, are just so much more to your credit. It was your right to go, two years ago, and now it's your duty. Couldn't you look at it in that light?"

"I dare say Mrs. March could," the editor assented. "I don't believe she could be brought to regard it as a pleasure on any other terms."

"Of course not," said Fulkerson. "If you won't take a year, take three months, and call it a Sabbatical summer; but go, anyway. You can make up half a dozen numbers ahead, and Tom, here, knows your ways so well that you needn't think about 'Every Other Week' from the time you start till the time you try to bribe the customs inspector when you get back. I can take a hack at the editing myself, if Tom's inspiration gives out, and put a little of my advertising fire into the thing." He laid his hand on the shoulder of the young fellow who stood smiling by, and pushed and shook him in the liking there was between them. "Now you go, March! Mrs. Fulkerson feels just as I do about it; we had our outing last year, and we want Mrs. March and you to have yours. You let me go down and engage your passage, and—"

"No, no!" the editor rebelled. "I'll think about it;" but as he turned to the work he was so fond of and so weary of, he tried not to think of the question again, till he closed his desk in the afternoon, and started to walk home; the doctor had said he ought to walk, and he did so, though he longed to ride, and looked wistfully at the passing cars.

He knew he was in a rut, as his wife often said; but if it was a rut, it was a support too; it kept him from wobbling: She always talked as if the flowery fields of youth lay on either side of the dusty road he had been going so long, and he had but to step aside from it, to be among the butterflies and buttercups again; he sometimes indulged this illusion, himself, in a certain ironical spirit which caressed while it mocked the notion. They had a tacit agreement that their youth, if they were ever to find it again, was to be looked for in Europe, where they met when they were young, and they had never been quite without the hope of going back there, some day, for a long sojourn. They had not seen the time when they could do so; they were dreamers, but, as they recognized, even dreaming is not free from care; and in his dream March had been obliged to work pretty steadily, if not too intensely. He had been forced to forego the distinctly literary ambition with which he had started in life because he had their common living to make, and he could not make it by writing graceful verse, or even graceful prose....