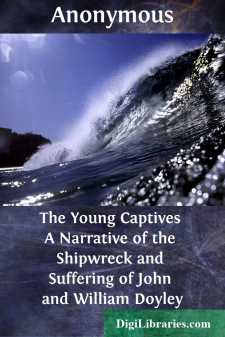 Here is a picture of a fine large English ship, called the Charles Eaton, which was wrecked in the Southern Ocean. The crew, you see, have made a raft of some of the spars and planks of the ship, and having all got upon it, are about cutting loose from the wreck, with the hope that they may reach one of the distant islands.

Poor men! they did indeed reach the island; but only to meet a more dreadful death than that threatened them by the waves. Overcome with fatigue and anxiety, they no sooner gained the shore, than they all, captain, crew, and passengers, threw themselves on the earth, and soon were fast asleep. In this helpless state, they were attacked by the cruel and blood-thirsty savages who inhabited the island, and all barbarously murdered, except two little boys, John and William Doyley.

These children, sons of a gentleman and lady who had been passengers in the ill-fated ship, were kept in captivity by the savages for many years.

At the time of the shipwreck, John was a stout lad, thirteen or fourteen years old; but little William was a mere infant, being scarcely two years of age! Think what a dreadful life these poor little orphans had before them! Their kind parents cruelly murdered, and themselves prisoners to the barbarous murderers!

At first the savages treated them harshly, and made them endure all kinds of privation and hardship. Finally, after changing from one cruel master to another several times, they were purchased by one more humane than the rest, named Dupper, who took them to his home on a distant island, and treated them with a great deal of kindness.

Dupper taught John how to shoot with the bow and arrow, with which he was himself very expert. He also showed him their method of spearing fish, and taught him many other savage accomplishments. In Dupper's family, too, the boys both learned to speak the native language, and they soon almost forgot their own.

But they did not forget their own country; at least John did not; and as he often talked with William about their dear parents, and the pleasant home they had left many miles away, there was but little danger of William forgetting it either.

Though kindly treated by Dupper and his family, and made as comfortable as their savage mode of life would allow, yet they suffered many cruel hardships, and severely felt the change from their former to their present way of living. They constantly sighed for home, and were made quite wretched by the prospect of a captivity to which they could see no end, except in death.

But the same kind Providence who had preserved them when their parents and the crew of the unfortunate ship were murdered, still watched over and protected these despairing orphans. The day of their deliverance came quite unexpectedly. An English vessel arrived at the island, and cast her anchor near the shore. The natives immediately manned their canoes, and flocked on board, to trade with the strangers. John was permitted to go with the others, and when on the deck of the vessel, he told the captain and officers all about the shipwreck, the murder of the crew and passengers, and his own and his brother's captivity.