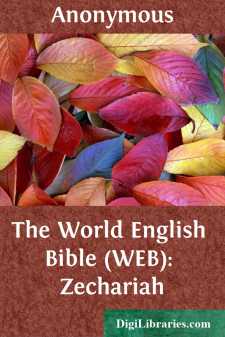 "Then they repented and said, 'Just as Yahweh of Armies determined to do to us, according to our ways, and according to our practices, so he has dealt with us.'" 1:7 On the twenty-fourth day of the eleventh month, which is the month Shebat, in the second year of Darius, the word of Yahweh came to Zechariah the son of Berechiah, the son of Iddo, the prophet, saying, 1:8 "I had a vision in the night, and behold, a man riding on a red horse, and he stood among the myrtle trees that were in a ravine; and behind him there were red, brown, and white horses. 1:9 Then I asked, 'My lord, what are these?'"

The angel who talked with me said to me, "I will show you what these are."

1:10 The man who stood among the myrtle trees answered, "They are the ones Yahweh has sent to go back and forth through the earth."

1:11 They reported to the angel of Yahweh who stood among the myrtle trees, and said, "We have walked back and forth through the earth, and behold, all the earth is at rest and in peace."1:12 Then the angel of Yahweh replied, "O Yahweh of Armies, how long will you not have mercy on Jerusalem and on the cities of Judah, against which you have had indignation these seventy years?"

1:13 Yahweh answered the angel who talked with me with kind and comforting words. 1:14 So the angel who talked with me said to me, "Proclaim, saying, 'Thus says Yahweh of Armies: "I am jealous for Jerusalem and for Zion with a great jealousy. 1:15 I am very angry with the nations that are at ease; for I was but a little displeased, but they added to the calamity." 1:16 Therefore thus says Yahweh: "I have returned to Jerusalem with mercy. My house shall be built in it," says Yahweh of Armies, "and a line shall be stretched forth over Jerusalem."'

1:17 "Proclaim further, saying, 'Thus says Yahweh of Armies: "My cities will again overflow with prosperity, and Yahweh will again comfort Zion, and will again choose Jerusalem."'"

He answered me, "These are the horns which have scattered Judah, Israel, and Jerusalem."

He said, "These are the horns which scattered Judah, so that no man lifted up his head; but these have come to terrify them, to cast down the horns of the nations, which lifted up their horn against the land of Judah to scatter it."