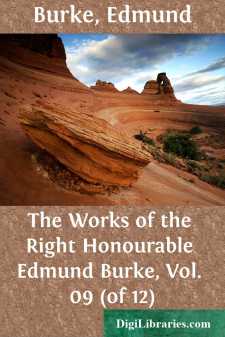 That the Court of Directors of the East India Company had laid down the following fundamental rules for the conduct of such of the Company's business in Bengal as could be performed by contract, and had repeatedly and strictly ordered the Governor and Council of Port William to observe those rules, viz.: That all contracts should be publicly advertised, and the most reasonable proposals accepted; that the contracts of provisions, and for furnishing draught and carriage bullocks for the army, should be annual; and that they should not fail to advertise for and receive proposals for those contracts every year.

That the said Warren Hastings, in direct disobedience to the said positive orders, and, as the Directors themselves say, by a most deliberate breach of his duty, did, in September, 1777, accept of proposals offered by Ernest Alexander Johnson for providing draught and carriage bullocks, and for victualling the Europeans, without advertising for proposals, as he was expressly commanded to do, and extended the contract for three years, which was positively ordered to be annual,—and, notwithstanding that extension of the period, which ought at least to have been compensated by some advantage to the Company in the conditions, did conclude the said contract upon terms less advantageous than the preceding contract, and therefore not on the lowest terms procurable. That the said Warren Hastings, in defiance of the judgment and lawful orders of his superiors, which in this case left him no option, declared, that he disapproved of publishing for proposals, and that the contract was reduced too low already: thereby avowing himself the advocate of the contractor, against whom, as representative of the Company, and guardian of their interests, he properly was party, and preferring the advantage of the contractor to those of his own constituents and employers. That the Court of Directors of the East India Company, having carefully considered the circumstances and tendency of this transaction, condemned it in the strongest terms, declaring, that they would not permit the contract to be continued, and that, "if the contractor should think himself aggrieved, and take measures in consequence by which the Company became involved in loss or damage, they should certainly hold the majority of the Council responsible for such loss or damage, and proceed against them accordingly."—That the said Warren Hastings, in defiance of orders, which the Directors say were plain and unequivocal, did, in January, 1777, receive from George Templer a proposal essentially different from the advertisement published by the Governor-General and Council for receiving proposals for feeding the Company's elephants, and did accept thereof, not only without having recourse to the proper means for ascertaining whether the said proposal was the lowest that would be offered, but with another actually before the board nearly thirty per cent lower than that made by the said George Templer, to whom the said Warren Hastings granted a contract, in the terms proposed by the said Templer, for three years, and did afterwards extend the same to five years, with new and distinct conditions, accepted by the said Warren Hastings, without advertising for fresh proposals, by which the Company were very considerable losers: on all which the Court of Directors declared, "that this waste of their property could not be permitted; that he, the said Warren Hastings, had disregarded their authority, and disobeyed their orders, in not taking the lowest offers"; and they ordered that the contract for elephants should be annulled: and the said Directors further declared, that, "if the contractor should recover damages of the Company for breach of engagement, they were determined, in such case, to institute a suit at law against those members of the board who had presumed, in direct breach of their orders, to prefer the interest of an individual to that of the Company."—That the said Warren Hastings did, in the year 1777, conclude with —— Forde a contract for an armed vessel for the pilotage of the Chittagong river, and for the defence of the coast and river against the incursions of robbers, for the term of five years, in further disobedience of the Company's orders respecting the mode and duration of contracts, and with a considerable increase of expense to the Company....