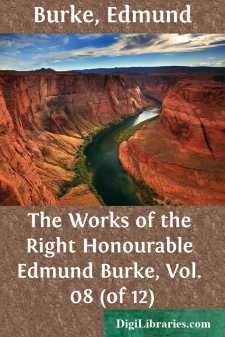 From the SELECT COMMITTEE [of the House of Commons] appointed to take into consideration the state of the administration of justice in the provinces of Bengal, Bahar, and Orissa, and to report the same, as it shall appear to them, to the House, with their observations thereupon; and who were instructed to consider how the British possessions in the East Indies may be held and governed with the greatest security and advantage to this country, and by what means the happiness of the native inhabitants may be best promoted.

I.—OBSERVATIONS ON THE STATE OF THE COMPANY'S AFFAIRS IN INDIA.

In order to enable the House to adopt the most proper means for regulating the British government in India, and for promoting the happiness of the natives who live under its authority or influence, your Committee hold it expedient to collect into distinct points of view the circumstances by which that government appears to them to be most essentially disordered, and to explain fully the principles of policy and the course of conduct by which the natives of all ranks and orders have been reduced to their present state of depression and misery.

Your Committee have endeavored to perform this task in plain and popular language, knowing that nothing has alienated the House from inquiries absolutely necessary for the performance of one of the most essential of all its duties so much as the technical language of the Company's records, as the Indian names of persons, of offices, of the tenure and qualities of estates, and of all the varied branches of their intricate revenue. This language is, indeed, of necessary use in the executive departments of the Company's affairs; but it is not necessary to Parliament. A language so foreign from all the ideas and habits of the far greater part of the members of this House has a tendency to disgust them with all sorts of inquiry concerning this subject. They are fatigued into such a despair of ever obtaining a competent knowledge of the transactions in India, that they are easily persuaded to remand them back to that obscurity, mystery, and intrigue out of which they have been forced upon public notice by the calamities arising from their extreme mismanagement. This mismanagement has itself, as your Committee conceive, in a great measure arisen from dark cabals, and secret suggestions to persons in power, without a regular public inquiry into the good or evil tendency of any measure, or into the merit or demerit of any person intrusted with the Company's concerns.

Present laws relating to the East India Company, and internal and external policy.The plan adopted by your Committee is, first, to consider the law regulating the East India Company, as it now stands,—and, secondly, to inquire into the circumstances of the two great links of connection by which the territorial possessions in India are united to this kingdom, namely, the Company's commerce, and the government exercised under the charter and under acts of Parliament. The last [first] of these objects, the commerce, is taken in two points of view: the external, or the direct trade between India and Europe, and the internal, that is to say, the trade of Bengal, in all the articles of produce and manufacture which furnish the Company's investment....