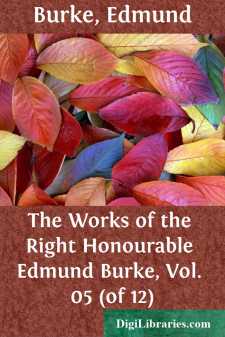 LETTERTOHIS GRACE THE DUKE OF PORTLAND.

My dear Lord,—The paper which I take the liberty of sending to your Grace was, for the greater part, written during the last session. A few days after the prorogation some few observations were added. I was, however, resolved to let it lie by me for a considerable time, that, on viewing the matter at a proper distance, and when the sharpness of recent impressions had been worn off, I might be better able to form a just estimate of the value of my first opinions.

I have just now read it over very coolly and deliberately. My latest judgment owns my first sentiments and reasonings, in their full force, with regard both to persons and things.

During a period of four years, the state of the world, except for some few and short intervals, has filled me with a good deal of serious inquietude. I considered a general war against Jacobins and Jacobinism as the only possible chance of saving Europe (and England as included in Europe) from a truly frightful revolution. For this I have been censured, as receiving through weakness, or spreading through fraud and artifice, a false alarm. Whatever others may think of the matter, that alarm, in my mind, is by no means quieted. The state of affairs abroad is not so much mended as to make me, for one, full of confidence. At home, I see no abatement whatsoever in the zeal of the partisans of Jacobinism towards their cause, nor any cessation in their efforts to do mischief. What is doing by Lord Lauderdale on the first scene of Lord George Gordon's actions, and in his spirit, is not calculated to remove my apprehensions. They pursue their first object with as much eagerness as ever, but with more dexterity. Under the plausible name of peace, by which they delude or are deluded, they would deliver us unarmed and defenceless to the confederation of Jacobins, whose centre is indeed in France, but whose rays proceed in every direction throughout the world. I understand that Mr. Coke, of Norfolk, has been lately very busy in spreading a disaffection to this war (which we carry on for our being) in the country in which his property gives him so great an influence. It is truly alarming to see so large a part of the aristocratic interest engaged in the cause of the new species of democracy, which is openly attacking or secretly undermining the system of property by which mankind has hitherto been governed. But we are not to delude ourselves. No man can be connected with a party which professes publicly to admire or may be justly suspected of secretly abetting this French Revolution, who must not be drawn into its vortex, and become the instrument of its designs.

What I have written is in the manner of apology. I have given it that form, as being the most respectful; but I do not stand in need of any apology for my principles, my sentiments, or my conduct. I wish the paper I lay before your Grace to be considered as my most deliberate, solemn, and even testamentary protest against the proceedings and doctrines which have hitherto produced so much mischief in the world, and which will infallibly produce more, and possibly greater....