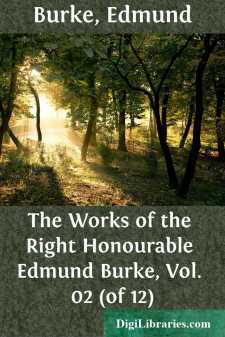 The following speech has been much the subject of conversation, and the desire of having it printed was last summer very general. The means of gratifying the public curiosity were obligingly furnished from the notes of some gentlemen, members of the last Parliament.

This piece has been for some months ready for the press. But a delicacy, possibly over-scrupulous, has delayed the publication to this time. The friends of administration have been used to attribute a great deal of the opposition to their measures in America to the writings published in England. The editor of this speech kept it back, until all the measures of government have had their full operation, and can be no longer affected, if ever they could have been affected, by any publication.

Most readers will recollect the uncommon pains taken at the beginning of the last session of the last Parliament, and indeed during the whole course of it, to asperse the characters and decry the measures of those who were supposed to be friends to America, in order to weaken the effect of their opposition to the acts of rigor then preparing against the colonies. The speech contains a full refutation of the charges against that party with which Mr. Burke has all along acted. In doing this, he has taken a review of the effects of all the schemes which have been successively adopted in the government of the plantations. The subject is interesting; the matters of information various and important; and the publication at this time, the editor hopes, will not be thought unseasonable.

During the last session of the last Parliament, on the 19th of April, 1774, Mr. Rose Fuller, member for Rye, made the following motion:—

"That an act made in the seventh year of the reign of his present Majesty, intituled, 'An act for granting certain duties in the British colonies and plantations in America; for allowing a drawback of the duties of customs upon the exportation from this kingdom of coffee and cocoa-nuts, of the produce of the said colonies or plantations; for discontinuing the drawbacks payable on china earthenware exported to America; and for more effectually preventing the clandestine running of goods in the said colonies and plantations, might be read."

And the same being read accordingly, he moved,—

"That this House will, upon this day sevennight, resolve itself into a committee of the whole House, to take into consideration the duty of three-pence per pound weight upon tea, payable in all his Majesty's dominions in America, imposed by the said act; and also the appropriation of the said duty."

On this latter motion a warm and interesting debate arose, in which Mr. Burke spoke as follows.

Sir,—I agree with the honorable gentleman who spoke last, that this subject is not new in this House. Very disagreeably to this House, very unfortunately to this nation, and to the peace and prosperity of this whole empire, no topic has been more familiar to us. For nine long years, session after session, we have been lashed round and round this miserable circle of occasional arguments and temporary expedients. I am sure our heads must turn and our stomachs nauseate with them. We have had them in every shape; we have looked at them in every point of view. Invention is exhausted; reason is fatigued; experience has given judgment; but obstinacy is not yet conquered.

The honorable gentleman has made one endeavor more to diversify the form of this disgusting argument. He has thrown out a speech composed almost entirely of challenges. Challenges are serious things; and as he is a man of prudence as well as resolution, I dare say he has very well weighed those challenges before he delivered them. I had long the happiness to sit at the same side of the House, and to agree with the honorable gentleman on all the American questions. My sentiments, I am sure, are well known to him; and I thought I had been perfectly acquainted with his. Though I find myself mistaken, he will still permit me to use the privilege of an old friendship; he will permit me to apply myself to the House under the sanction of his authority, and, on the various grounds he has measured out, to submit to you the poor opinions which I have formed upon a matter of importance enough to demand the fullest consideration I could bestow upon it....