The Works of Robert Louis Stevenson - Swanston Edition Vol. 25 (of 25) 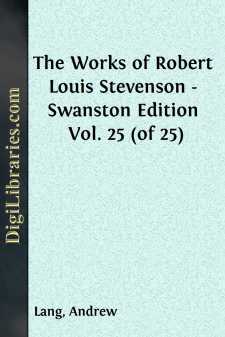 Returning from Sydney at the end of October 1890, Stevenson and his wife at once took up their abode in the wooden four-roomed cottage, or “rough barrack,” as he calls it, which had been built for them in the clearing at Vailima during the months of their absence at Sydney and on their cruise in the Equator. Mr. Lloyd Osbourne in the meantime had started for England to wind up the family affairs at Bournemouth. During the first few months, as will be seen by the following letters, the conditions of life at Vailima were rough to the point of hardship. But matters soon mended; the work of clearing and planting went on under the eye of the master and mistress diligently and in the main successfully, though not of course without complications and misadventures. Ways and means of catering were found, and abundance began to reign in place of the makeshifts and privations of the first days. By April a better house, fit to receive the elder Mrs. Stevenson, had been built; and later in the year plans for further extension were considered, but for the present held over. The attempt made at first to work the establishment by means of white servants and head-men indoors and out proved unsatisfactory, and was gradually superseded by the formation of an efficient native staff, which in course of time developed itself into something like a small, devoted feudal clan.

During the earlier months of 1891 Stevenson was not in continuous residence on his new property, but went away on two excursions, the first to Sydney to meet his mother; the second, in company of the American Consul Mr. Sewall, to Tutuila, a neighbouring island of the Samoan group. Of the latter, to him very interesting, trip, the correspondence contains only the beginning of an account abruptly broken off: more, will be found in the extracts from his diary given in Mr. Graham Balfour’s Life (ed. 1906, pp. 312 f.). During part of the spring he was fortunate in having the company of two distinguished Americans, the painter Lafarge and the historian Henry Adams, in addition to that of the local planters, traders, and officials, a singular and singularly mixed community. After some half-year’s residence he began to realise that the arrangements made for the government of Samoa by treaty between the three powers England, Germany, and America were not working nor promising to work well. Stevenson was no abstracted student or dreamer; the human interests and human duties lying immediately about him were ever the first in his eyes; and he found himself drawn deeply into the complications of local politics, as so active a spirit could not fail to be drawn, however little taste he might have for the work.

He kept in the meantime at a fair level of health, and among the multitude of new interests was faithful in the main business of his life—that is, to literature. He did not cease to toil uphill at the heavy task of preparing for serial publication the letters, or more properly chapters, on the South Seas. He planned and began delightedly his happiest tale of South Sea life, The High Woods of Ulufanua, afterwards changed to The Beach of Falesá; conceived the scheme, which was never carried out, of working two of his old conceptions into one long genealogical novel or fictitious family history to be called The Shovels of Newton French; and in the latter part of the year worked hard in continuation of The Wrecker. Having completed this during November, he turned at once, from a sense of duty rather than from any literary inspiration, to the Footnote to History, a laboriously prepared and minutely conscientious account of recent events in Samoa.

From his earliest days at Vailima, determined that our intimacy should suffer no diminution by absence, Stevenson began, to my great pleasure, the practice of writing me a monthly budget containing a full account of his doings and interests. At first the pursuits of the enthusiastic farmer, planter, and overseer filled these letters delightfully, to the exclusion of almost everything else except references to his books projected or in hand. Later these interests began to give place in his letters to those of the local politician, immersed in affairs which seemed to me exasperatingly petty and obscure, however grave the potential European complications which lay behind them. At any rate, they were hard to follow intelligently from the other side of the globe; and it was a relief whenever his correspondence turned to matters literary or domestic, or humours of his own mind and character....