The Works of Robert Louis Stevenson - Swanston Edition Vol. 24 (of 25) 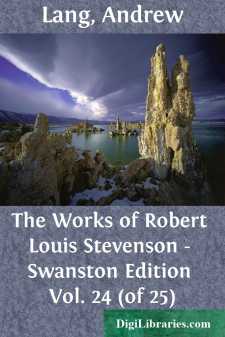 In the two years and odd months since his return from California, Stevenson had made no solid gain of health. His winters, and especially his second winter, at Davos had seemed to do him much temporary good; but during the summers in Scotland he had lost as much as he had gained, or more. Loving the Mediterranean shores of France from of old, he now made up his mind to try them once again.

As the ways and restrictions of a settled invalid were repugnant to Stevenson’s character and instincts, so were the life and society of a regular invalid station depressing and uncongenial to him. He determined, accordingly, to avoid settling in one of these, and hoped to find a suitable climate and habitation that should be near, though not in, some centre of the active and ordinary life of man, with accessible markets, libraries, and other resources. In September 1882 he started with his cousin Mr. R. A. M. Stevenson in search of a new home, and thought first of trying the Languedoc coast, a region new to him. At Montpellier, he was laid up again with a bad bout of his lung troubles; and, the doctor not recommending him to stay, returned to Marseilles. Here he was rejoined by his wife, and after a few days’ exploration in the neighbourhood they lighted on what seemed exactly the domicile they wanted. This was a roomy and attractive enough house and garden called the Campagne Defli, near the manufacturing suburb of St. Marcel, in a sheltered position in full view of the shapely coastward hills. By the third week in October they were installed, and in eager hopes of pleasant days to come and a return to working health. These hopes were not realised. Week after week went on, and the hemorrhages and fits of fever and exhaustion did not diminish. Work, except occasional verses, and a part of the story called The Treasure of Franchard, would not flow, and the time had to be whiled away with games of patience and other resources of the sick man. Nearly two months were thus passed; during the whole of one of them Stevenson had not been able to go beyond the garden; and by Christmas he had to face the fact that the air of the place was tainted. An epidemic of fever, due to some defect of drainage, broke out, and it became clear that this could be no home for Stevenson. Accordingly, at his wife’s instance, though having scarce the strength to travel, he left suddenly for Nice, she staying behind to pack their chattels and wind up their affairs and responsibilities as well as might be. Various misadventures, miscarriages of telegrams, journeys taken at cross purposes and the like, making existence uncomfortably dramatic at the moment, caused the couple to believe for a while that they had fairly lost each other. Mrs. Stevenson allows me to print a letter from herself to Mr. J. A. Symonds vividly relating these predicaments (see p. 11 foll.). At last, in the course of January, they came safely together at Marseilles, and next made a few weeks’ stay at Nice, where Stevenson’s health quickly mended....