The Works of Robert Louis Stevenson - Swanston Edition Vol. 2 (of 25) 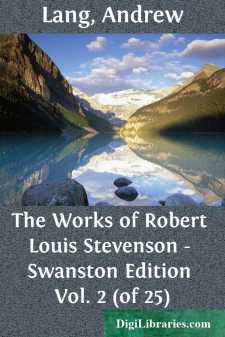 I first encountered my fellow-passengers on the Broomielaw in Glasgow. Thence we descended the Clyde in no familiar spirit, but looking askance on each other as on possible enemies. A few Scandinavians, who had already grown acquainted on the North Sea, were friendly and voluble over their long pipes; but among English speakers distance and suspicion reigned supreme. The sun was soon overclouded, the wind freshened and grew sharp as we continued to descend the widening estuary; and with the falling temperature the gloom among the passengers increased. Two of the women wept. Any one who had come aboard might have supposed we were all absconding from the law. There was scarce a word interchanged, and no common sentiment but that of cold united us, until at length, having touched at Greenock, a pointing arm and rush to the starboard bow announced that our ocean steamer was in sight. There she lay in mid-river, at the tail of the Bank, her sea-signal flying: a wall of bulwark, a street of white deck-houses, an aspiring forest of spars, larger than a church, and soon to be as populous as many an incorporated town in the land to which she was to bear us.

I was not, in truth, a steerage passenger. Although anxious to see the worst of emigrant life, I had some work to finish on the voyage, and was advised to go by the second cabin, where at least I should have a table at command. The advice was excellent; but to understand the choice, and what I gained, some outline of the internal disposition of the ship will first be necessary. In her very nose is Steerage No. 1, down two pair of stairs. A little abaft, another companion, labelled Steerage No. 2 and 3, gives admission to three galleries, two running forward towards steerage No. 1, and the third aft towards the engines. The starboard forward gallery is the second cabin. Away abaft the engines and below the officers’ cabins, to complete our survey of the vessel, there is yet a third nest of steerages, labelled 4 and 5. The second cabin, to return, is thus a modified oasis in the very heart of the steerages. Through the thin partition you can hear the steerage passengers being sick, the rattle of tin dishes as they sit at meals, the varied accents in which they converse, the crying of their children terrified by this new experience, or the clean flat smack of the parental hand in chastisement.

There are, however, many advantages for the inhabitant of this strip. He does not require to bring his own bedding or dishes, but finds berths and a table completely if somewhat roughly furnished. He enjoys a distinct superiority in diet; but this, strange to say, differs not only on different ships, but on the same ship according as her head is to the east or west. In my own experience, the principal difference between our table and that of the true steerage passenger was the table itself, and the crockery plates from which we ate. But lest I should show myself ungrateful, let me recapitulate every advantage. At breakfast we had a choice between tea and coffee for beverage; a choice not easy to make, the two were so surprisingly alike....