The Works of Robert Louis Stevenson - Swanston Edition Vol. 18 (of 25) 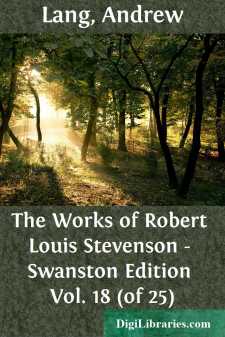 CHAPTER I AN ISLAND LANDFALL

For nearly ten years my health had been declining; and for some while before I set forth upon my voyage, I believed I was come to the afterpiece of life, and had only the nurse and undertaker to expect. It was suggested that I should try the South Seas; and I was not unwilling to visit like a ghost, and be carried like a bale, among scenes that had attracted me in youth and health. I chartered accordingly Dr. Merrit’s schooner yacht, the Casco, seventy-four tons register; sailed from San Francisco towards the end of June 1888, visited the eastern islands, and was left early the next year at Honolulu. Hence, lacking courage to return to my old life of the house and sick-room, I set forth to leeward in a trading schooner, the Equator, of a little over seventy tons, spent four months among the atolls (low coral islands) of the Gilbert group, and reached Samoa towards the close of ’89. By that time gratitude and habit were beginning to attach me to the islands; I had gained a competency of strength; I had made friends; I had learned new interests; the time of my voyages had passed like days in fairyland; and I decided to remain. I began to prepare these pages at sea, on a third cruise, in the trading steamer Janet Nicoll. If more days are granted me, they shall be passed where I have found life most pleasant and man most interesting; the axes of my black boys are already clearing the foundations of my future house; and I must learn to address readers from the uttermost parts of the sea.

That I should thus have reversed the verdict of Lord Tennyson’s hero is less eccentric than appears. Few men who come to the islands leave them; they grow grey where they alighted; the palm shades and the trade-wind fans them till they die, perhaps cherishing to the last the fancy of a visit home, which is rarely made, more rarely enjoyed, and yet more rarely repeated. No part of the world exerts the same attractive power upon the visitor, and the task before me is to communicate to fireside travellers some sense of its seduction, and to describe the life, at sea and ashore, of many hundred thousand persons, some of our own blood and language, all our contemporaries, and yet as remote in thought and habit as Rob Roy or Barbarossa, the Apostles or the Cæsars.

The first experience can never be repeated. The first love, the first sunrise, the first South Sea island, are memories apart and touched a virginity of sense. On the 28th of July 1888 the moon was an hour down by four in the morning. In the east a radiating centre of brightness told of the day; and beneath, on the skyline, the morning bank was already building, black as ink. We have all read of the swiftness of the day’s coming and departure in low latitudes; it is a point on which the scientific and sentimental tourist are at one, and has inspired some tasteful poetry. The period certainly varies with the season; but here is one case exactly noted. Although the dawn was thus preparing by four, the sun was not up till six; and it was half-past five before we could distinguish our expected islands from the clouds on the horizon....