The Works of Robert Louis Stevenson - Swanston Edition Vol. 10 (of 25) 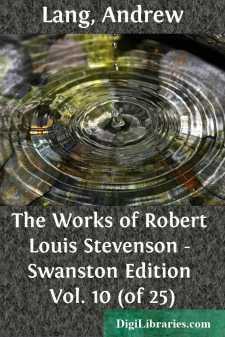 CHAPTER I IN WHICH JOHN SOWS THE WIND

John Varey Nicholson was stupid; yet stupider men than he are now sprawling in Parliament, and lauding themselves as the authors of their own distinction. He was of a fat habit, even from boyhood, and inclined to a cheerful and cursory reading of the face of life; and possibly this attitude of mind was the original cause of his misfortunes. Beyond this hint philosophy is silent on his career, and superstition steps in with the more ready explanation that he was detested of the gods.

His father—that iron gentleman—had long ago enthroned himself on the heights of the Disruption Principles. What these are (and in spite of their grim name they are quite innocent) no array of terms would render thinkable to the merely English intelligence; but to the Scot they often prove unctuously nourishing, and Mr. Nicholson found in them the milk of lions. About the period when the churches convene at Edinburgh in their annual assemblies, he was to be seen descending the Mound in the company of divers red-headed clergymen: these voluble, he only contributing oracular nods, brief negatives, and the austere spectacle of his stretched upper lip. The names of Candlish and Begg were frequent in these interviews, and occasionally the talk ran on the Residuary Establishment and the doings of one Lee. A stranger to the tight little theological kingdom of Scotland might have listened and gathered literally nothing. And Mr. Nicholson (who was not a dull man) knew this, and raged at it. He knew there was a vast world outside to whom Disruption Principles were as the chatter of tree-top apes; the paper brought him chill whiffs from it; he had met Englishmen who had asked lightly if he did not belong to the Church of Scotland, and then had failed to be much interested by his elucidation of that nice point; it was an evil, wild, rebellious world, lying sunk in dozenedness, for nothing short of a Scots word will paint this Scotsman’s feelings. And when he entered his own house in Randolph Crescent (south side), and shut the door behind him, his heart swelled with security. Here, at least, was a citadel unassailable by right-hand defections or left-hand extremes. Here was a family where prayers came at the same hour, where the Sabbath literature was unimpeachably selected, where the guest who should have leaned to any false opinion was instantly set down, and over which there reigned all the week, and grew denser on Sundays, a silence that was agreeable to his ear, and a gloom that he found comfortable.

Mrs. Nicholson had died about thirty, and left him with three children: a daughter two years and a son about eight years younger than John; and John himself, the unfortunate protagonist of the present history. The daughter, Maria, was a good girl—dutiful, pious, dull, but so easily startled that to speak to her was quite a perilous enterprise. “I don’t think I care to talk about that, if you please,” she would say, and strike the boldest speechless by her unmistakable pain; this upon all topics—dress, pleasure, morality, politics, in which the formula was changed to “my papa thinks otherwise,” and even religion, unless it was approached with a particular whining tone of voice....