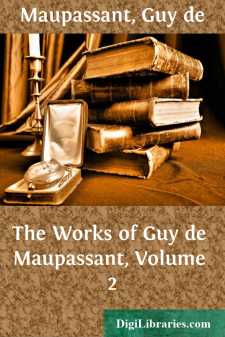 Little George was making hills of sand in one of the walks; he took it up with both his hands, made it into a pyramid, and then put a chestnut leaf on the top, and his father, sitting on an iron chair was looking at him with concentrated and affectionate attention, and saw nobody but him in that small public garden which was full of people. All along the circular road other children were occupied in the same manner, or else were indulging in childish games, while nursemaids were walking two and two, with their bright cap ribbons floating behind them, and carrying something wrapped up in lace, on their arms, and little girls in short petticoats and bare legs were talking seriously together, during the intervals of trundling their hoops.

The sun was just disappearing behind the roofs of the Rue Saint-Lazare, but still shed its rays obliquely on that little over-dressed crowd. The chestnut trees were lighted up with its yellow rays, and the three fountains before the lofty porch of the church, had the appearance of liquid silver.

Monsieur Parent looked at his son sitting in the dusk, he followed his slightest movements with affection, but accidentally looking up at the church clock, he saw that he was five minutes late, so he got up, took the child by the arm and shook his dress which was covered with sand, wiped his hands and led him in the direction of the Rue Blanche, and he walked quickly, so as not to get in after his wife, but as the child could not keep up with him, he took him up and carried him, though it made him pant when he had to walk up the steep street. He was a man of forty, turning gray already, rather stout, and had married, a few years previously, a young woman whom he dearly loved, but who now treated him with the severity and authority of an all-powerful despot. She found fault with him continually for everything that he did, or did not do, reproached him bitterly for his slightest acts, his habits, his simple pleasures, his tastes, his movements and walk, and for having a round stomach and a placid voice.

He still loved her, however, but above all he loved the child which he had had by her, and George, who was now three, had become the greatest joy, and had preoccupation of his heart. He himself had a modest private fortune, and lived without doing anything on his twenty thousand francs a year, and his wife, who had been quite portionless, was constantly angry at her husband's inactivity.

At last he reached his house, put down the child, wiped his forehead and walked upstairs, and when he got to the second floor, he rang. An old servant who had brought him up, one of those mistress-servants who are the tyrants of families, opened the door to him, and he asked her anxiously: "Has Madame come in yet?" The servant shrugged her shoulders: "When have you ever known Madame to come home at half past six, Monsieur?" And he replied with some embarrassment: "Very well; all the better; it will give me time to change my things, for I am very hot."

The servant looked at him with angry and contemptuous pity, and grumbled: "Oh!...