The Wonders of a Toy Shop 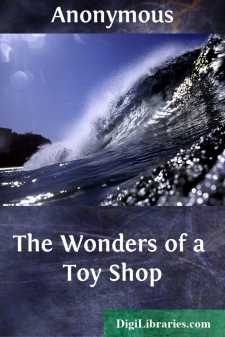 "Pray, what would you like?" said a Toyman, one day,Addressing a group of young folks,"I have toys in abundance, and very cheap, too,Though not quite so cheap as my jokes. "Here's a famous managerie, full of wild beasts;See! this lion with wide open jaws,Enough to affright one, and yet I've no doubt,You might venture to play with his claws.   "Here's a tiger as tame as a lap-dog, you'll find,And a fox that will not steal the geese:So here you must own the old adage is proved,That wonders are never to cease." "Here's wagon well laden, and here is a dray,With horses and harness complete;You can drive them in parlour and drawing-room, too,As easily as in the street.   "Here's a whole file of soldiers, quite ready for fight,And each of them armed with a gun;You may knock them all down with a feather, and thenYou may pocket them—every one. "Here's a fine stud of horses, which, strange though it sounds,Live neither on corn nor on hay;A gentleman's carriage, and tilbury, too,For which we've no taxes to pay.   "A coachman so plump, and a footman so tall,Who cost not a penny for food;For to tell you the truth, all their insides are filledWith a permanent dinner of wood. "Examine this sword, with its handle and sheath,And its blade made of innocent wood;'Twere well if all swords were as harmless as this,And as equally guiltless of blood.   "Here's a mill that will go without water or wind,A wonder, you cannot deny;I really can't say whether it will grind corn,But it will be easy to try. That iron-gray rocking-horse, close at your side,With saddle and bridle complete,Will go without whipping, and, equally strange,Without making use of his feet:   "Yet, stranger than that—whatsoever his pace,Whether canter, or gallop, or trot,Though moving at ten miles an hour—he ne'erAdvances one inch from the spot. "A full set of bricks is enclosed in this box,(With the mortar we well may dispense,)But with these you may build a magnificent house,Without e'en a farthing's expense.   "With these you may raise up a Royal Exchange,In less than five minutes, and thenKnock it down, and build up a new Parliament House,In another five minutes,—or ten. "A doll's pretty kitchen, stands next on the shelf,With grate, pans, and kettle, and pot;With dish and tureen, and all crockery-ware,Knives and forks, and I cannot tell what;   "They would not quite do for a great city feast,But I think I may venture to sayA minnow or tittlebat there might be cooked,As a rarity

Transcriber's note:The last line seems to have text missing, however, the scanned image does not show damage.