The Wives of the Dead (From: "The Snow Image and Other Twice-Told Tales") 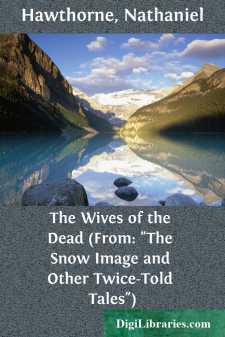 The following story, the simple and domestic incidents of which may be deemed scarcely worth relating, after such a lapse of time, awakened some degree of interest, a hundred years ago, in a principal seaport of the Bay Province. The rainy twilight of an autumn day,—a parlor on the second floor of a small house, plainly furnished, as beseemed the middling circumstances of its inhabitants, yet decorated with little curiosities from beyond the sea, and a few delicate specimens of Indian manufacture,—these are the only particulars to be premised in regard to scene and season. Two young and comely women sat together by the fireside, nursing their mutual and peculiar sorrows. They were the recent brides of two brothers, a sailor and a landsman, and two successive days had brought tidings of the death of each, by the chances of Canadian warfare and the tempestuous Atlantic. The universal sympathy excited by this bereavement drew numerous condoling guests to the habitation of the widowed sisters. Several, among whom was the minister, had remained till the verge of evening; when, one by one, whispering many comfortable passages of Scripture, that were answered by more abundant tears, they took their leave, and departed to their own happier homes. The mourners, though not insensible to the kindness of their friends, had yearned to be left alone. United, as they had been, by the relationship of the living, and now more closely so by that of the dead, each felt as if whatever consolation her grief admitted were to be found in the bosom of the other. They joined their hearts, and wept together silently. But after an hour of such indulgence, one of the sisters, all of whose emotions were influenced by her mild, quiet, yet not feeble character, began to recollect the precepts of resignation and endurance which piety had taught her, when she did not think to need them. Her misfortune, besides, as earliest known, should earliest cease to interfere with her regular course of duties; accordingly, having placed the table before the fire, and arranged a frugal meal, she took the hand of her companion.

"Come, dearest sister; you have eaten not a morsel to-day," she said. "Arise, I pray you, and let us ask a blessing on that which is provided for us."

Her sister-in-law was of a lively and irritable temperament, and the first pangs of her sorrow had been expressed by shrieks and passionate lamentation. She now shrunk from Mary's words, like a wounded sufferer from a hand that revives the throb.

"There is no blessing left for me, neither will I ask it!" cried Margaret, with a fresh burst of tears. "Would it were His will that I might never taste food more!"

Yet she trembled at these rebellious expressions, almost as soon as they were uttered, and, by degrees, Mary succeeded in bringing her sister's mind nearer to the situation of her own. Time went on, and their usual hour of repose arrived. The brothers and their brides, entering the married state with no more than the slender means which then sanctioned such a step, had confederated themselves in one household, with equal rights to the parlor, and claiming exclusive privileges in two sleeping-rooms contiguous to it. Thither the widowed ones retired, after heaping ashes upon the dying embers of their fire, and placing a lighted lamp upon the hearth. The doors of both chambers were left open, so that a part of the interior of each, and the beds with their unclosed curtains, were reciprocally visible. Sleep did not steal upon the sisters at one and the same time. Mary experienced the effect often consequent upon grief quietly borne, and soon sunk into temporary forgetfulness, while Margaret became more disturbed and feverish, in proportion as the night advanced with its deepest and stillest hours. She lay listening to the drops of rain, that came down in monotonous succession, unswayed by a breath of wind; and a nervous impulse continually caused her to lift her head from the pillow, and gaze into Mary's chamber and the intermediate apartment. The cold light of the lamp threw the shadows of the furniture up against the wall, stamping them immovably there, except when they were shaken by a sudden flicker of the flame. Two vacant arm-chairs were in their old positions on opposite sides of the hearth, where the brothers had been wont to sit in young and laughing dignity, as heads of families; two humbler seats were near them, the true thrones of that little empire, where Mary and herself had exercised in love a power that love had won. The cheerful radiance of the fire had shone upon the happy circle, and the dead glimmer of the lamp might have befitted their reunion now. While Margaret groaned in bitterness, she heard a knock at the street door.

"How would my heart have leapt at that sound but yesterday!" thought she, remembering the anxiety with which she had long awaited tidings from her husband.

"I care not for it now; let them begone, for I will not arise."

But even while a sort of childish fretfulness made her thus resolve, she was breathing hurriedly, and straining her ears to catch a repetition of the summons....