The Wings of the Dove, Volume II 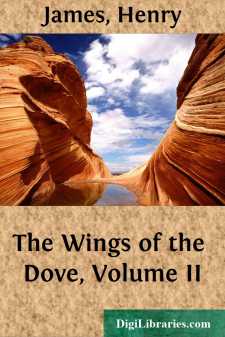 "I say, you know, Kate—you did stay!" had been Merton Densher's punctual remark on their adventure after they had, as it were, got out of it; an observation which she not less promptly, on her side, let him see that she forgave in him only because he was a man. She had to recognise, with whatever disappointment, that it was doubtless the most helpful he could make in this character. The fact of the adventure was flagrant between them; they had looked at each other, on gaining the street, as people look who have just rounded together a dangerous corner, and there was therefore already enough unanimity sketched out to have lighted, for her companion, anything equivocal in her action. But the amount of light men did need!—Kate could have been eloquent at this moment about that. What, however, on his seeing more, struck him as most distinct in her was her sense that, reunited after his absence and having been now half the morning together, it behooved them to face without delay the question of handling their immediate future. That it would require some handling, that they should still have to deal, deal in a crafty manner, with difficulties and delays, was the great matter he had come back to, greater than any but the refreshed consciousness of their personal need of each other. This need had had twenty minutes, the afternoon before, to find out where it stood, and the time was fully accounted for by the charm of the demonstration. He had arrived at Euston at five, having wired her from Liverpool the moment he landed, and she had quickly decided to meet him at the station, whatever publicity might attend such an act. When he had praised her for it on alighting from his train she had answered frankly enough that such things should be taken at a jump. She didn't care to-day who saw her, and she profited by it for her joy. To-morrow, inevitably, she should have time to think and then, as inevitably, would become a baser creature, a creature of alarms and precautions. It was none the less for to-morrow at an early hour that she had appointed their next meeting, keeping in mind for the present a particular obligation to show at Lancaster Gate by six o'clock. She had given, with imprecations, her reason—people to tea, eternally, and a promise to Aunt Maud; but she had been liberal enough on the spot and had suggested the National Gallery for the morning quite as with an idea that had ripened in expectancy. They might be seen there too, but nobody would know them; just as, for that matter, now, in the refreshment-room to which they had adjourned, they would incur the notice but, at the worst, of the unacquainted. They would "have something" there for the facility it would give. Thus had it already come up for them again that they had no place of convenience.

He found himself on English soil with all sorts of feelings, but he hadn't quite faced having to reckon with a certain ruefulness in regard to that subject as one of the strongest. He was aware later on that there were questions his impatience had shirked; whereby it actually rather smote him, for want of preparation and assurance, that he had nowhere to "take" his love. He had taken it thus, at Euston—and on Kate's own suggestion—into the place where people had beer and buns, and had ordered tea at a small table in the corner; which, no doubt, as they were lost in the crowd, did well enough for a stop-gap. It perhaps did as well as her simply driving with him to the door of his lodging, which had had to figure as the sole device of his own wit. That wit, the truth was, had broken down a little at the sharp prevision that once at his door they would have to hang back. She would have to stop there, wouldn't come in with him, couldn't possibly; and he shouldn't be able to ask her, would feel he couldn't without betraying a deficiency of what would be called, even at their advanced stage, respect for her: that again was all that was clear except the further fact that it was maddening. Compressed and concentrated, confined to a single sharp pang or two, but none the less in wait for him there on the Euston platform and lifting its head as that of a snake in the garden, was the disconcerting sense that "respect," in their game, seemed somehow—he scarce knew what to call it—a fifth wheel to the coach. It was properly an inside thing, not an outside, a thing to make love greater, not to make happiness less. They had met again for happiness, and he distinctly felt, during his most lucid moment or two, how he must keep watch on anything that really menaced that boon. If Kate had consented to drive away with him and alight at his house there would probably enough have occurred for them, at the foot of his steps, one of those strange instants between man and woman that blow upon the red spark, the spark of conflict, ever latent in the depths of passion. She would have shaken her head—oh sadly, divinely—on the question of coming in; and he, though doing all justice to her refusal, would have yet felt his eyes reach further into her own than a possible word at such a time could reach. This would have meant the suspicion, the dread of the shadow, of an adverse will. Lucky therefore in the actual case that the scant minutes took another turn and that by the half-hour she did in spite of everything contrive to spend with him Kate showed so well how she could deal with things that maddened. She seemed to ask him, to beseech him, and all for his better comfort, to leave her, now and henceforth, to treat them in her own way.

She had still met it in naming so promptly, for their early convenience, one of the great museums; and indeed with such happy art that his fully seeing where she had placed him hadn't been till after he left her. His absence from her for so many weeks had had such an effect upon him that his demands, his desires had grown; and only the night before, as his ship steamed, beneath summer stars, in sight of the Irish coast, he had felt all the force of his particular necessity....