The White Rose of Langley A Story of the Olden Time 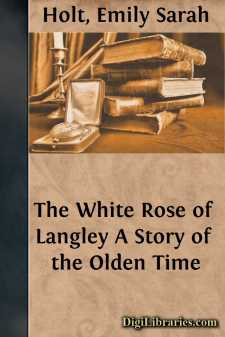 The woman addressed languidly roused herself from the half-sheltered nook of the forest in which she and her child had taken refuge. She was leaning with her back supported by a giant oak, and the child was in her arms. The age of the child was about eight. The mother, though still young in years, was old before her time, with hard work and exposure, and it might be also with sorrow. She sat up, and looked wearily over the winter scene before her. There was nothing of the querulous, complaining tone of the little girl’s voice in hers; only the dull, sullen apathy of hopeless endurance.

“Cold, child!” she said. “’Tis like to be colder yet when the night cometh.”

“There be chiller gear than snow, maid,” replied the mother bitterly.

“But it had been warmer in London, Mother?—if we had not lost our road.”

“May-be,” was the answer, in a tone which seemed to imply that it did not signify.

The child did not reply; and the woman continued to sit upright, and look forward, with an absent expression in her face, indicating that the mind was not where the eyes were.

“Only snow and frost!” she muttered—not speaking to the child. “Nought beyond, nor here ne there. Nay, snow is better than snowed-up hearts. Had it been warmer in London? May-be the hearts there had been as frosty as at Pleshy. Well! it will be warm in the grave, and we shall soon win yonder.”

“Be there fires yonder, Mother?” asked the child innocently.

The woman laughed—a bitter, harsh laugh, in which there was no mirth.

“The devil keepeth,” she said. “At least so say the priests. But what wit they? They never went thither to see. They will, belike, some day.”

The little girl was silent again, and the mother, after a moment’s pause, resumed her interrupted soliloquy.

“If there were nought beyond, only!” she murmured; and her look and tone of dull misery sharpened into vivid pain. “If a man might die, and have done with it all! But to meet God! And ’tis no sweven, (dream) ne fallacy, this dread undeadliness (immortality)—it is real. O all ye blessed saints and martyrs in Heaven! how shall I meet God?”

“Is that holy Mary’s Son, Mother?”

“Holy Mary will plead for us,” suggested the child. “She can alway peace her Son. But methought He was good to folks, Mother. Sister Christian was wont to say so.”

“To saints and good women like Sister Christian, may-be.”

“Art thou not good, Mother?”

The question was put in all innocence. But it struck the heart of the miserable mother like a poisoned arrow.

“Good!” she cried, again in that tone of intense pain. “I good? No, Maude!—I am bad, bad, bad! From the crown of mine head to the sole of my foot, there is nothing in me beside evil; such evil as thou, unwemmed (undefiled, innocent) dove as thou art, canst not even conceive!...