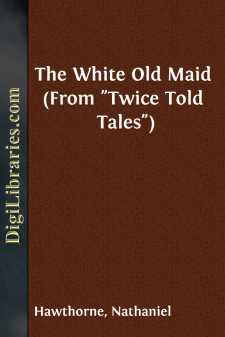 The moonbeams came through two deep and narrow windows, and showed a spacious chamber, richly furnished in an antique fashion. From one lattice, the shadow of the diamond panes was thrown upon the floor; the ghostly light, through the other, slept upon a bed, falling between the heavy silken curtains, and illuminating the face of a young man. But, how quietly the slumberer lay! how pale his features! and how like a shroud the sheet was wound about his frame! Yes; it was a corpse, in its burial-clothes.

Suddenly, the fixed features seemed to move, with dark emotion. Strange fantasy! It was but the shadow of the fringed curtain, waving betwixt the dead face and the moonlight, as the door of the chamber opened, and a girl stole softly to the bedside. Was there delusion in the moonbeams, or did her gesture and her eye betray a gleam of triumph, as she bent over the pale corpse-pale as itself—and pressed her living lips to the cold ones of the dead? As she drew back from that long kiss, her features writhed, as if a proud heart were fighting with its anguish. Again it seemed that the features of the corpse had moved responsive to her own. Still an illusion! The silken curtain had waved, a second time, betwixt the dead face and the moonlight, as another fair young girl unclosed the door, and glided, ghost-like, to the bedside. There the two maidens stood, both beautiful, with the pale beauty of the dead between them. But she, who had first entered, was proud and stately; and the other, a soft and fragile thing.

"Away!" cried the lofty one. "Thou hadst him living! The dead is mine!"

"Thine!" returned the other, shuddering. "Well hast thou spoken! The dead is thine!"

The proud girl started, and stared into her face, with a ghastly look. But a wild and mournful expression passed across the features of the gentle one; and, weak and helpless, she sank down on the bed, her head pillowed beside that of the corpse, and her hair mingling with his dark locks. A creature of hope and joy, the first draught of sorrow had bewildered her.

Edith groaned, as with a sudden compression of the heart; and removing her cheek from the dead youth's pillow, she stood upright, fearfully encountering the eyes of the lofty girl.

"Wilt thou betray me?" said the latter, calmly.

"Till the dead bid me speak, I will be silent," answered Edith. "Leave us alone together! Go, and live many years, and then return, and tell me of thy life. He, too, will be here! Then, if thou tellest of sufferings more than death, we will both forgive thee."

"And what shall be the token?" asked the proud girl, as if her heart acknowledged a meaning in these wild words.

"This lock of hair," said Edith, lifting one of the dark, clustering curls, that lay heavily on the dead man's brow.

The two maidens joined their hands over the bosom of the corpse, and appointed a day and hour, far, far in time to come, for their next meeting in that chamber. The statelier girl gave one deep look at the motionless countenance, and departed,—yet turned again and trembled, ere she closed the door, almost believing that her dead lover frowned upon her. And Edith, too! Was not her white form fading into the moonlight? Scorning her own weakness, she went forth, and perceived that a negro slave was waiting in the passage, with a wax light, which he held between her face and his own, and regarded her, as she thought, with an ugly expression of merriment. Lifting his torch on high, the slave lighted her down the staircase, and undid the portal of the mansion....