The White Lady of Hazelwood A Tale of the Fourteenth Century 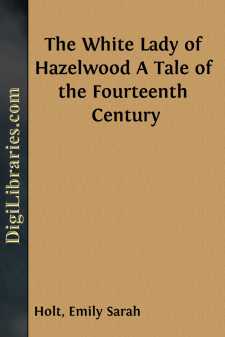 On the crowded canvas of the fourteenth century stands out as one of its most prominent figures that of the warrior Countess of Montfort. No reader of Froissart’s Chronicle can forget the siege of Hennebon, and the valiant part she played in the defence of her son’s dominions. Actuated by more personal motives than the peasant maid, she was nevertheless the Joan of Arc of her day, and of Bretagne.

What became of her?

After the restoration of her son, we see no more of that brave and tender mother. She drops into oblivion. Her work was done. Those who have thought again of her at all have accepted without question the only extant answer—the poor response of a contemporary romance, according to which she dwelt in peace, and closed an honoured and cherished life in a castle in the duchy of her loving and grateful son.

It has been reserved for the present day to find the true reply—to draw back the veil from the “bitter close of all,” and to show that the hardest part of her work began when she laid down her sword, and the ending years of her life were the saddest and weariest portion. Never since the days of Lear has such a tale been told of a parent’s sacrifice and of a child’s ingratitude. In the royal home of the Duke of Bretagne, there was no room for her but for whose love and care he would have been a homeless fugitive. The discarded mother was imprisoned in a foreign land, and left to die.

Let us hope that as it is supposed in the story, the lonely, broken heart turned to a truer love than that of her cherished and cruel son—even to His who says “My mother” of all aged women who seek to do the will of God, and who will never forsake them that trust in Him.

Chapter One. At the Patty-Maker’s Shop.

“Man wishes to be loved—expects to be so:And yet how few live so as to be loved!” Rev. Horatius Bonar, D.D.

It was a warm afternoon in the beginning of July—warm everywhere; and particularly so in the house of Master Robert Altham, the patty-maker, who lived at the corner of Saint Martin’s Lane, where it runs down into the Strand. Shall we look along the Strand? for the time is 1372, five hundred years ago, and the Strand was then a very different place from the street as we know it now.

In the first place, Trafalgar Square had no being. Below where it was to be in the far future, stood Charing Cross—the real Eleanor Cross of Charing, a fine Gothic structure—and four streets converged upon it. That to the north-west parted almost directly into the Hay Market and Hedge Lane, genuine country roads, in which both the hay and the hedge had a real existence. Southwards ran King Street down to Westminster; and northwards stood the large building of the King’s Mews, where his Majesty’s hawks were kept. Two hundred years later, bluff King Hal would turn out the hawks to make room for his horses; but as yet the word mews had its proper signification of a place where hawks were mewed or confined. At the corner of the Mews, between it and the patty-maker’s, ran up Saint Martin’s Lane; its western boundary being the long blank wall of the Mews, and its eastern a few houses, and then Saint Martin’s Church....