The Welsh and Their Literature from The London Quarterly Review, January 1861, American Edition 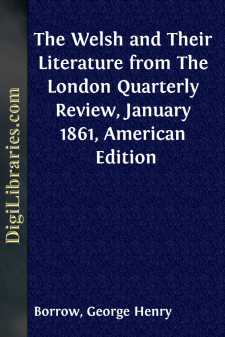 The Welsh style themselves Cymry or Cumry, a word which, in their language, means a number of people associated together.   They were the second mass of population which moved from Asia into Europe.  They followed and pushed forward the Gael or Gauls; were themselves impelled onward by the Slowaks or Sclavonians, who were themselves hunted, goaded, and pestered by a wild, waspish race of people, whom, for want of a better name, we will call Tatars or Tartars.  The Cymry have left their name behind them in various regions far eastward of the one where they now sojourn.  The most easterly countries which still bear their name, or modifications thereof, are Cambia, ‘which is two dayes journey from the head of the great river Bruapo,’ and the Cryme or Crimea.  In those parts, and ‘where Constantinople now is,’ they tarried a considerable time, and increased and multiplied marvellously: and it was whilst tarrying in those regions, which they called collectively Gwlad yr Haf, or the summer country, that an extraordinary man was born amongst them, who was called by Greeks and Romans, hundreds of years after his death, Hesus, but whom the Cymry called, and still do call, Hu or Hee, with the surname of Cadarn, or the Mighty.  This Hu or Hesus taught his countrymen the use of the plough, and to a certain extent civilized them.  Finding eventually that the summer country was becoming over-populated, he placed himself at the head of a vast multitude and set off towards the west.  Hu and his people fought or negotiated their way through various countries possessed by the Gael, till they came to the shore of the sea which separates the great isle of the west from the continent.  Hearing that it was only thinly peopled they determined to pass over to it; and put their determination into execution, crossing ‘the hazy sea,’ at present termed the German Ocean, in boats made of wicker work and skins, similar to but larger than the coracles which the Cymry always carried with them in their long expeditions.

This great island was called Alban, Albyn, or Albion.  Alban is a Gaelic or Gaulic word, signifying properly a hill-region.  It is to be found under various modifications in different parts of the world, but only where the Gaulic race have at some time sojourned.  The word Afghan is merely a modification of Alban, or Alpan; so is Armenia; so is Alp; so is of course Albania.  The term was given to the island simply because the cliffs which fronted the continent, where the sea between the two lands was narrowest, were very high and towering.  The island at the time of the arrival of the Cymry had, as has already been intimated, a scanty population.  This population consisted of Gael or Gauls, a people of cognate race to the Cymry, and speaking a language much the same as theirs, differing from it, however, in some respects.  Hu and his people took possession of the best parts of the island, either driving the few Gaels to other districts or admitting them to their confederacy.  As the country was in a very wild state, much overgrown with forests in which bears and wolves wandered, and abounding with deep stagnant pools, which were the haunts of the avanc or crocodile, Hu forthwith set about clearing it of some of its horrors, and making it more fit to be the abiding place of civilized beings.  He made his people cut down woods and forests, and destroy, as far as was possible, wild beasts and crocodiles.  He himself went to a gloomy pool, the haunt of the king of the efync, baited a huge hook attached to a cable, filing it into the pool, and when the monster had gorged the snare drew him out by means of certain gigantic oxen, which he had tamed to the plough, and burnt his horrid, wet, scaly carcass on a fire.  He then caused enclosures to be made, fields to be ploughed and sown, pleasant wooden houses to be built, bees to be sheltered and encouraged, and schools to be erected where song and music were taught.  O, a truly great man was Hu Gadarn! though a warrior, he preferred the sickle and pruning-hook to the sword, and the sound of the song and lute to the hoarse blast of the buffalo’s horn:—

The mighty Hu with mead would payThe bard for his melodious lay;The Emperor of land and seaAnd of all livings things was he.

For many years after the death of Hu the Cymry retrograded instead of advancing in civilization; they ceased to be a united people; plunder and devastation were of daily occurrence among them; every one did as he pleased, as far as in his power lay; there was no law, but the law of the strongest; and no justice, save that which was obtained from clemency and courtesy.  At length one Prydain arose, who, either from ambition or a nobler motive, determined to introduce a system of government amongst them.  By strength of arm and character he induced the Cymry of the lower country to acknowledge him for their head, and to obey certain laws which he enacted for the regulation of conduct.  But neither his sovereignty nor his laws were regarded by the Cymry of the hilly regions.  Prydain was the first king amongst the Cymry; and from his time the island was called Britain, which is a modification of his name, and the inhabitants Britons.  The independent Cymry, however, disdained to call themselves or their districts after him, but still styled themselves Cymry, and their districts Cumrie-land and Cumberland; whilst the Gael of the North, who never submitted to his sway, and who knew little about him, still called themselves Gael, and their country Caledon and Alban....