The Well of the Saints 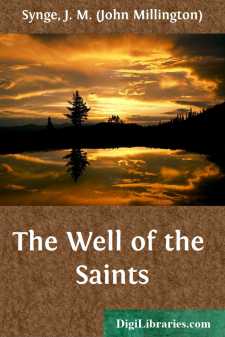 [Roadside with big stones, etc., on the right; low loose wall at back with gap near centre; at left, ruined doorway of church with bushes beside it. Martin Doul and Mary Doul grope in on left and pass over to stones on right, where they sit.]

MARY DOUL. What place are we now, Martin Doul?

MARY DOUL — [raising her head.] — The length of that! Well, the sun's getting warm this day if it's late autumn itself.

MARTIN DOUL — [putting out his hands in sun.] — What way wouldn't it be warm and it getting high up in the south? You were that length plaiting your yellow hair you have the morning lost on us, and the people are after passing to the fair of Clash.

MARY DOUL. It isn't going to the fair, the time they do be driving their cattle and they with a litter of pigs maybe squealing in their carts, they'd give us a thing at all. (She sits down.) It's well you know that, but you must be talking.

MARTIN DOUL — [sitting down beside her and beginning to shred rushes she gives him.] — If I didn't talk I'd be destroyed in a short while listening to the clack you do be making, for you've a queer cracked voice, the Lord have mercy on you, if it's fine to look on you are itself.

MARY DOUL. Who wouldn't have a cracked voice sitting out all the year in the rain falling? It's a bad life for the voice, Martin Doul, though I've heard tell there isn't anything like the wet south wind does be blowing upon us for keeping a white beautiful skin — the like of my skin — on your neck and on your brows, and there isn't anything at all like a fine skin for putting splendour on a woman.

MARTIN DOUL — [teasingly, but with good humour.] — I do be thinking odd times we don't know rightly what way you have your splendour, or asking myself, maybe, if you have it at all, for the time I was a young lad, and had fine sight, it was the ones with sweet voices were the best in face.

MARY DOUL. Let you not be making the like of that talk when you've heard Timmy the smith, and Mat Simon, and Patch Ruadh, and a power besides saying fine things of my face, and you know rightly it was "the beautiful dark woman" they did call me in Ballinatone.

MARTIN DOUL — [as before.] — If it was itself I heard Molly Byrne saying at the fall of night it was little more than a fright you were.

MARY DOUL — [sharply.] — She was jealous, God forgive her, because Timmy the smith was after praising my hair.

MARY DOUL. Ay, jealous, Martin Doul; and if she wasn't itself, the young and silly do be always making game of them that's dark, and they'd think it a fine thing if they had us deceived, the way we wouldn't know we were so fine-looking at all.

[She puts her hand to her face with a complacent gesture.]

MARTIN DOUL — [a little plaintively.] — I do be thinking in the long nights it'd be a grand thing if we could see ourselves for one hour, or a minute itself, the way we'd know surely we were the finest man and the finest woman of the seven counties of the east (bitterly) and then the seeing rabble below might be destroying their souls telling bad lies, and we'd never heed a thing they'd say....