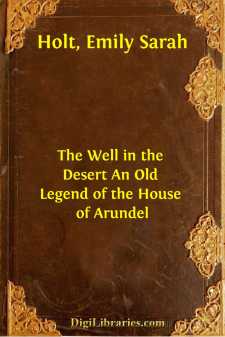 It is said that only travellers in the arid lands of the East really know the value of water. To them the Well in the Desert is a treasure and a blessing: unspeakably so, when the water is pure and sweet; yet even though it be salt and brackish, it may still save life.

Was it less so, in a figurative sense, to the travellers through that great desert of the Middle Ages, wherein the wells were so few and far between? True, the water was brackish; man had denied the streams, and filled up the wells with stones; yet for all this it was God-given, and to those who came, and dug for the old spring, and drank, it was the water of eternal life. The cry was still sounding down the ages.

“If any man thirst, let him come unto Me, and drink.” And no less blessed are the souls that come now: but for us, the wells are so numerous and so pure, that we too often pass them by, and go on our way thirsting. Strange blindness!—yet not strange: for until the Angel of the Lord shall open the eyes of Hagar, she must needs go mourning through the wilderness, not seeing the well.

“Lord, that we may receive our sight!”—and may come unto Thee, and drink, and thirst no more.

Chapter One. My Lady’s Bower is swept.

Soft and balmy was the air, and the sunlight radiant, at an early hour of a beautiful June morning; and fair was the landscape that met the eyes of the persons who were gathered a few feet from the portcullis of a grand stately old castle, crowning a wooded height near the Sussex coast. There were two persons seated on horseback: the one a youth of some twenty years, in a page’s dress; the other a woman, who sat behind him on the pillion. Standing about were two men and a woman, the last holding a child in her arms. The woman on the pillion was closely veiled, and much muffled in her wrappings, considering the season of the year and the warmth of the weather; nor did she lift her veil when she spoke.

“The child, Alina,” she said, in a tone so soft and low that the words seemed rather breathed than spoken.

The woman who stood beside the horse answered the appeal by placing the child in the arms of the speaker. It was a pretty, engaging little girl of three years old. The lady on the pillion, lifting the child underneath her veil, strained it to her bosom, and bowed her head low upon its light soft hair. Meanwhile, the horse stood still as a statue, and the page sat as still before her. In respectful silence the other three stood round. They knew, every one of them, that in that embrace to one of the two the bitterness of death was passing; and that when it was ended she would have nothing left to fear—only because she would have nothing left to hope. At length, suddenly, the lady lifted her head, and held forth the child to Alina. Turning her head away toward the sea, from the old castle, from the child, she made her farewell in one word....