The War in South Africa Its Cause and Conduct 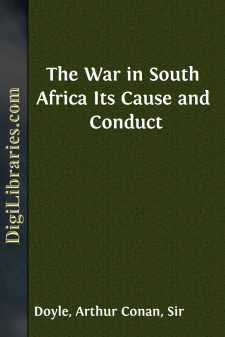 It is impossible to appreciate the South African problem and the causes which have led up to the present war between the British Empire and the Boer republics without some knowledge, however superficial, of the past history of South Africa. To tell the tale one must go back to the beginning, for there has been complete continuity of history in South Africa, and every stage has depended upon that which has preceded it. No one can know or appreciate the Boer who does not know his past, for he is what his past has made him.

It was about the time when Oliver Cromwell was at his zenith—in 1652, to be pedantically accurate—that the Dutch made their first lodgment at the Cape of Good Hope. The Portuguese had been there before them, but, repelled by the evil weather, and lured forward by rumours of gold, they had passed the true seat of empire, and had voyaged farther, to settle along the eastern coast. But the Dutchmen at the Cape prospered and grew stronger in that robust climate. They did not penetrate far inland, for they were few in number, and all they wanted was to be found close at hand. But they built themselves houses, and they supplied the Dutch East India Company with food and water, gradually budding off little townlets, Wynberg, Stellenbosch, and pushing their settlements up the long slopes which lead to that great central plateau which extends for 1,500 miles from the edge of the Karoo to the Valley of the Zambesi.

For a hundred more years the history of the colony was a record of the gradual spreading of the Africanders over the huge expanse of veldt which lay to the north of them. Cattle-raising became an industry, but in a country where six acres can hardly support a sheep, large farms are necessary for even small herds. Six thousand acres was the usual size, and 5l. a year the rent payable to Government. The diseases which follow the white man had in Africa, as in America and Australia, been fatal to the natives, and an epidemic of smallpox cleared the country for the new-comers. Farther and farther north they pushed, founding little towns here and there, such as Graaf-Reinet and Swellendam, where a Dutch Reformed Church and a store for the sale of the bare necessaries of life formed a nucleus for a few scattered dwellings. Already the settlers were showing that independence of control and that detachment from Europe which has been their most prominent characteristic. Even the mild sway of the Dutch Company had caused them to revolt. The local rising, however, was hardly noticed in the universal cataclysm which followed the French Revolution. After twenty years, during which the world was shaken by the Titanic struggle in the final counting up of the game and paying of the stakes, the Cape Colony was added in 1814 to the British Empire.

In all the vast collection of British States there is probably not one the title-deeds to which are more incontestable than to this. Britain had it by two rights, the right of conquest and the right of purchase....