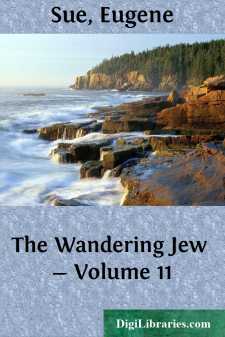 THE RUINS OF THE ABBEY OF ST. JOHN THE BAPTIST.

The sun is fast sinking. In the depths of an immense piny wood, in the midst of profound solitude, rise the ruins of an abbey, once sacred to St. John the Baptist. Ivy, moss, and creeping plants, almost entirely conceal the stones, now black with age. Some broken arches, some walls pierced with ovals, still remain standing, visible on the dark background of the thick wood. Looking down upon this mass of ruins from a broken pedestal, half-covered with ivy, a mutilated, but colossal statue of stone still keeps its place. This statue is strange and awful. It represents a headless human figure. Clad in the antique toga, it holds in its hand a dish and on that dish is a head. This head is its own. It is the statue of St. John the Baptist and Martyr, put to death by wish of Herodias.

The silence around is solemn. From time to time, however, is heard the dull rustling of the enormous branches of the pine-trees, shaken by the wind. Copper-colored clouds, reddened by the setting sun, pass slowly over the forest, and are reflected in the current of a brook, which, deriving its source from a neighboring mass of rocks, flows through the ruins. The water flows, the clouds pass on, the ancient trees tremble, the breeze murmurs.

Suddenly, through the shadow thrown by the overhanging wood, which stretches far into endless depths, a human form appears. It is a woman. She advances slowly towards the ruins. She has reached them. She treads the once sacred ground. This woman is pale, her look sad, her long robe floats on the wind, her feet covered with dust. She walks with difficulty and pain. A block of stone is placed near the stream, almost at the foot of the statue of John the Baptist. Upon this stone she sinks breathless and exhausted, worn out with fatigue. And yet, for many days, many years, many centuries, she has walked on unwearied.

For the first time, she feels an unconquerable sense of lassitude. For the first time, her feet begin to fail her. For the first time, she, who traversed, with firm and equal footsteps, the moving lava of torrid deserts, while whole caravans were buried in drifts of fiery sand—who passed, with steady and disdainful tread, over the eternal snows of Arctic regions, over icy solitudes, in which no other human being could live—who had been spared by the devouring flames of conflagrations, and by the impetuous waters of torrents—she, in brief, who for centuries had had nothing in common with humanity—for the first time suffers mortal pain.

Her feet bleed, her limbs ache with fatigue, she is devoured by burning thirst. She feels these infirmities, yet scarcely dares to believe them real. Her joy would be too immense! But now, her throat becomes dry, contracted, all on fire. She sees the stream, and throws herself on her knees, to quench her thirst in that crystal current, transparent as a mirror. What happens then? Hardly have her fevered lips touched the fresh, pure water, than, still kneeling, supported on her hands, she suddenly ceases to drink, and gazes eagerly on the limpid stream....