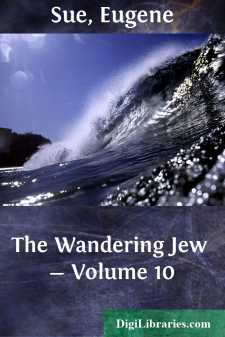 During the painful scene that we have just described, a lively emotion glowed in the countenance of Mdlle. de Cardoville, grown pale and thin with sorrow. Her cheeks, once so full, were now slightly hollowed, whilst a faint line of transparent azure encircled those large black eyes, no longer so bright as formerly. But the charming lips, though contracted by painful anxiety, had retained their rich and velvet moisture. To attend more easily to Mother Bunch, Adrienne had thrown aside her bonnet, and the silky waves of her beautiful golden hair almost concealed her face as she bent over the mattress, rubbing the thin, ivory hands of the poor sempstress, completely called to life by the salubrious freshness of the air, and by the strong action of the salts which Adrienne carried in her smelling-bottle. Luckily, Mother Bunch had fainted, rather from emotion and weakness than from the effects of suffocation, the senses of the unfortunate girl having failed her before the deleterious gas had attained its highest degree of intensity.

Before continuing the recital of the scene between the sempstress and the patrician, a few retrospective words will be necessary. Since the strange adventure at the theatre of the Porte-Saint-Martin, where Djalma, at peril of his life, rushed upon the black panther in sight of Mdlle. de Cardoville, the young lady had been deeply affected in various ways. Forgetting her jealousy, and the humiliation she had suffered in presence of Djalma—of Djalma exhibiting himself before every one with a woman so little worthy of him—Adrienne was for a moment dazzled by the chivalrous and heroic action of the prince, and said to herself: "In spite of odious appearances, Djalma loves me enough to brave death in order to pick up my nosegay."

But with a soul so delicate as that of this young lady, a character so generous, and a mind so true, reflection was certain soon to demonstrate the vanity of such consolations, powerless to cure the cruel wounds of offended dignity an love.

"How many times," said Adrienne to herself, and with reason, "has the prince encountered, in hunting, from pure caprice and with no gain, such danger as he braved in picking up my bouquet! and then, who tells me he did not mean to offer it to the woman who accompanied him?"

Singular (it may be) in the eyes of the world, but just and great in those of heaven, the ideas which Adrienne cherished with regard to love, joined to her natural pride, presented an invincible obstacle to the thought of her succeeding this woman (whoever she might be), thus publicly displayed by the prince as his mistress. And yet Adrienne hardly dared avow to herself, that she experienced a feeling of jealousy, only the more painful and humiliating, the less her rival appeared worthy to be compared to her.

At other times, on the contrary, in spite of a conscious sense of her own value, Mdlle. de Cardoville, remembering the charming countenance of Rose-Pompon, asked herself if the bad taste and improper manners of this pretty creature resulted from precocious and depraved effrontery, or from a complete ignorance of the usages of society. In the latter case, such ignorance, arising from a simple and ingenuous nature, might in itself have a great charm; and if to this attraction, combined with that of incontestable beauty, were added sincere love and a pure soul, the obscure birth, or neglected education of the girl might be of little consequence, and she might be capable of inspiring Djalma with a profound passion. If Adrienne hesitated to see a lost creature in Rose-Pompon, notwithstanding unfavorable appearances, it was because, remembering what so many travellers had related of Djalma's greatness of soul, and recalling the conversation she had overheard between him and Rodin, she could not bring herself to believe that a man of such remarkable intelligence, with so tender a heart, so poetical, imaginative and enthusiastic a mind could be capable of loving a depraved and vulgar creature, and of openly exhibiting himself in public along with her....