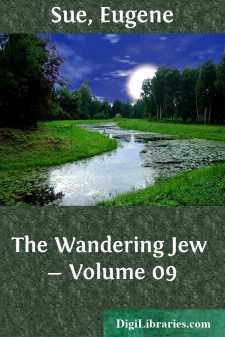 It is night. The moon shines and the stars glimmer in the midst of a serene but cheerless sky; the sharp whistlings of the north wind, that fatal, dry, and icy breeze, ever and anon burst forth in violent gusts. With its harsh and cutting breath, it sweeps Montmartre's Heights. On the highest point of the hills, a man is standing. His long shadow is cast upon the stony, moon-lit ground. He gazes on the immense city, which lies outspread beneath his feet. PARIS—with the dark outline of its towers, cupolas, domes, and steeples, standing out from the limpid blue of the horizon, while from the midst of the ocean of masonry, rises a luminous vapor, that reddens the starry azure of the sky. It is the distant reflection of the thousand fires, which at night, the hour of pleasures, light up so joyously the noisy capital.

"No," said the wayfarer; "it is not to be. The Lord will not exact it. Is not twice enough?

"Five centuries ago, the avenging hand of the Almighty drove me hither from the uttermost confines of Asia. A solitary traveller, I had left behind me more grief, despair, disaster, and death, than the innumerable armies of a hundred devastating conquerors. I entered this town, and it too was decimated.

"Again, two centuries ago, the inexorable hand, which leads me through the world, brought me once more hither; and then, as the time before, the plague, which the Almighty attaches to my steps, again ravaged this city, and fell first on my brethren, already worn out with labor and misery.

"My brethren—mine?—the cobbler of Jerusalem, the artisan accursed by the Lord, who, in my person, condemned the whole race of workmen, ever suffering, ever disinherited, ever in slavery, toiling on like me without rest or pause, without recompense or hope, till men, women, and children, young and old, all die beneath the same iron yoke—that murderous yoke, which others take in their turn, thus to be borne from age to age on the submissive and bruised shoulders of the masses.

"And now, for the third time in five centuries, I reach the summit of one of the hills that overlook the city. And perhaps I again bring with me fear, desolation, and death.

"Yet this city, intoxicated with the sounds of its joys and its nocturnal revelries, does not know—oh! does not know that I am at its gates.

"But no, no! my presence will not be a new calamity. The Lord, in his impenetrable views, has hitherto led me through France, so as to avoid the humblest hamlet; and the sound of the funeral knell has not accompanied my passage.

"And, moreover, the spectre has left me—the green, livid spectre, with its hollow, bloodshot eyes. When I touched the soil of France, its damp and icy hands was no longer clasped in mine—and it disappeared.

"And yet—I feel that the atmosphere of death is around me.

"The sharp whistlings of that fatal wind cease not, which, catching me in their whirl, seem to propagate blasting and mildew as they blow.

"But perhaps the wrath of the Lord is appeased, and my presence here is only a threat—to be communicated in some way to those whom it should intimidate....