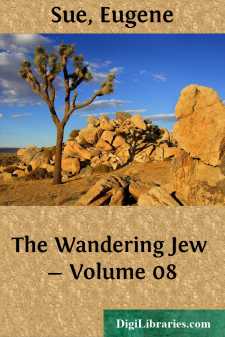 CHAPTER I. THE WANDERING JEW'S CHASTISEMENT.

'Tis night—the moon is brightly shining, the brilliant stars are sparkling in a sky of melancholy calmness, the shrill whistlings of a northerly wind—cold, bleak, and evil-bearing—are increasing: winding about, and bursting into violent blasts, with their harsh and hissing gusts, they are sweeping the heights of Montmartre. A man is standing on the very summit of the hill; his lengthened shadow, thrown out by the moon's pale beams, darkens the rocky ground in the distance. The traveller is surveying the huge city lying at his feet—the City of Paris—from whose profundities are cast up its towers, cupolas, domes, and steeples, in the bluish moisture of the horizon; while from the very centre of this sea of stones is rising a luminous vapor, reddening the starry azure of the sky above. It is the distant light of a myriad lamps which at night, the season for pleasure, is illuminating the noisy capital.

"No!" said the traveller, "it will not be. The Lord surely will not suffer it. Twice is quite enough. Five centuries ago, the avenging hand of the Almighty drove me hither from the depths of Asia. A solitary wanderer, I left in my track more mourning, despair, disaster, and death, than the innumerable armies of a hundred devastating conquerors could have produced. I then entered this city, and it was decimated. Two centuries ago that inexorable hand which led me through the world again conducted me here; and on that occasion, as on the previous one, that scourge, which at intervals the Almighty binds to my footsteps, ravaged this city, attacking first my brethren, already wearied by wretchedness and toil. My brethren! through me—the laborer of Jerusalem, cursed by the Lord, who in my person cursed the race of laborers—a race always suffering, always disinherited, always slaves, who like me, go on, on, on, without rest or intermission, without recompense, or hope; until at length, women, men, children, and old men, die under their iron yoke of self-murder, that others in their turn then take up, borne from age to age on their willing but aching shoulders. And here again, for the third time, in the course of five centuries, I have arrived at the summit of one of the hills which overlooks the city; and perhaps I bring again with me terror, desolation, and death. And this unhappy city, intoxicated in a whirl of joys, and nocturnal revelries, knows nothing about it—oh! it knows not that I am at its very gate. But no! no! my presence will not be a source of fresh calamity to it. The Lord, in His unsearchable wisdom, has brought me hither across France, making me avoid on my route all but the humblest villages, so that no increase of the funeral knell has, marked my journey. And then, moreover, the spectre has left me—that spectre, livid and green, with its deep bloodshot eyes. When I touched the soil of France, its moist and icy hand abandoned mine—it disappeared. And yet I feel the atmosphere of death surrounding me still....