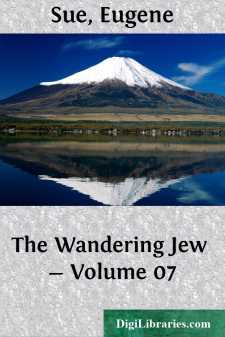 THE EAST INDIAN IN PARIS.

Since three days, Mdlle. de Cardoville had left Dr. Baleinier's. The following scene took place in a little dwelling in the Rue Blanche, to which Djalma had been conducted in the name of his unknown protector. Fancy to yourself a pretty, circular apartment, hung with Indian drapery, with purple figures on a gray ground, just relieved by a few threads of gold. The ceiling, towards the centre, is concealed by similar hangings, tied together by a thick, silken cord; the two ends of this cord, unequal in length, terminated, instead of tassels, in two tiny Indian lamps of gold filigreed-work, marvellously finished. By one of those ingenious combinations, so common in barbarous countries, these lamps served also to burn perfumes. Plates of blue crystal, let in between the openings of the arabesque, and illumined by the interior light, shone with so limpid an azure, that the golden lamps seemed starred with transparent sapphires. Light clouds, of whitish vapor rose incessantly from these lamps, and spread all around their balmy odor.

Daylight was only admitted to this room (it was about two o'clock in the afternoon) through a little greenhouse, on the other side of a door of plate-glass, made to slide into the thickness of the wall, by means of a groove. A Chinese shade was arranged so as to hide or replace this glass at pleasure. Some dwarf palm tress, plantains, and other Indian productions, with thick leaves of a metallic green, arranged in clusters in this conservatory, formed, as it were, the background to two large variegated bushes of exotic flowers, which were separated by a narrow path, paved with yellow and blue Japanese tiles, running to the foot of the glass. The daylight, already much dimmed by the leaves through which it passed, took a hue of singular mildness as it mingled with the azure lustre of the perfumed lamps, and the crimson brightness of the fire in the tall chimney of oriental porphyry. In the obscurity of this apartment, impregnated with sweet odors and the aromatic vapor of Persian tobacco, a man with brown, hanging locks, dressed in a long robe of dark green, fastened round the waist by a parti-colored sash, was kneeling upon a magnificent Turkey carpet, filling the golden bowl of a hookah; the long, flexible tube of this pipe, after rolling its folds upon the carpet, like a scarlet serpent with silver scales, rested between the slender fingers of Djalma, who was reclining negligently on a divan. The young prince was bareheaded; his jet-black hair, parted on the middle of his forehead, streamed waving about his face and neck of antique beauty—their warm transparent colors resembling amber or topaz. Leaning his elbow on a cushion, he supported his chin with the palm of his right hand. The flowing sleeve of his robe, falling back from his arm, which was round as that of a woman, revealed mysterious signs formerly tattooed there in India by a Thug's needle. The son of Radja-sing held in his left hand the amber mouthpiece of his pipe....