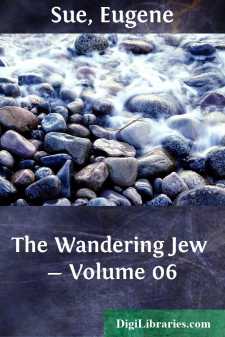 The first of the two, whose arrival had interrupted the answer of the notary, was Faringhea. At sight of this man's forbidding countenance, Samuel approached, and said to him: "Who are you, sir?"

After casting a piercing glance at Rodin, who started but soon recovered his habitual coolness, Faringhea replied to Samuel: "Prince Djalma arrived lately from India, in order to be present here this day, as it was recommended to him by an inscription on a medal, which he wore about his neck."

"He, also!" cried Gabriel, who had been the shipmate of the Indian Prince from the Azores, where the vessel in which he came from Alexandria had been driven into port: "he also one of the heirs! In fact, the prince told me during the voyage that his mother was of French origin. But, doubtless, he thought it right to conceal from me the object of his journey. Oh! that Indian is a noble and courageous young man. Where is he?"

The Strangler again looked at Rodin, and said, laying strong emphasis upon his words: "I left the prince yesterday evening. He informed me that, although he had a great interest to be here, he might possibly sacrifice that interest to other motives. I passed the night in the same hotel, and this morning, when I went to call on him, they told me he was already gone out. My friendship for him led me to come hither, hoping the information I should be able to give might be of use to the prince."

In making no mention of the snare into which he had fallen the day before, in concealing Rodin's machinations with regard to Djalma, and in attributing the absence of this latter to a voluntary cause, the Strangler evidently wished to serve the socius, trusting that Rodin would know how to recompense his discretion. It is useless to observe, that all this story was impudently false. Having succeeded that morning in escaping from his prison by a prodigious effort of cunning, audacity, and skill, he had run to the hotel where he had left Djalma; there he had learned that a man and woman, of an advanced age, and most respectable appearance, calling themselves relations of the young Indian, had asked to see him—and that, alarmed at the dangerous state of somnolency in which he seemed to be plunged, they had taken him home in their carriage, in order to pay him the necessary attention.

"It is unfortunate," said the notary, "that this heir also did not make his appearance—but he has, unhappily, forfeited his right to the immense inheritance that is in question."

"Oh! an immense inheritance is in question," said Faringhea, looking fixedly at Rodin, who prudently turned away his eyes.

The second of the two personages we have mentioned entered at this moment. It was the father of Marshal Simon, an old man of tall stature, still active and vigorous for his age. His hair was white and thin. His countenance, rather fresh-colored, was expressive at once of quickness, mildness and energy.

Agricola advanced hastily to meet him. "You here, M. Simon!" he exclaimed.

"Yes, my boy," said the marshal's father, cordially pressing Agricola's hand "I have just arrived from my journey....