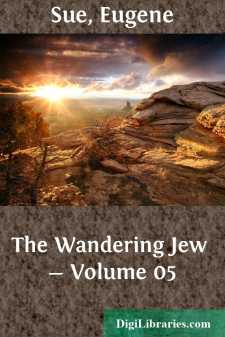 About two hours before the event last related took place at St. Mary's Convent, Rodin and Abbe d'Aigrigny met in the room where we have already seen them, in the Rue du Milieu-des-Ursins. Since the Revolution of July, Father d'Aigrigny had thought proper to remove for the moment to this temporary habitation all the secret archives and correspondence of his Order—a prudent measure, since he had every reason to fear that the reverend fathers would be expelled by the state from that magnificent establishment, with which the restoration had so liberally endowed their society. [11]

Rodin, dressed in his usual sordid style, mean and dirty as ever, was writing modestly at his desk, faithful to his humble part of secretary, which concealed, as we have already seen a far more important office—that of Socius—a function which, according to the constitutions of the Order, consists in never quitting his superior, watching his least actions, spying into his very thoughts, and reporting all to Rome.

In spite of his usual impassibility, Rodin appeared visibly uneasy and absent in mind; he answered even more briefly than usual to the commands and questions of Father d'Aigrigny, who had but just entered the room.

"Has anything new occurred during my absence?" asked he. "Are the reports still favorable?"

"Before giving this account to your reverence," said Rodin, "I must inform you that Morok has been two days in Paris."

"Morok?" said Abbe d'Aigrigny, with surprise. "I thought, on leaving Germany and Switzerland, he had received from Friburg the order to proceed southward. At Nismes, or Avignon, he would at this moment be useful as an agent; for the Protestants begin to move, and we fear a reaction against the Catholics."

"I do not know," said Rodin, "if Morok may not have had private reasons for changing his route. His ostensible reasons are, that he comes here to give performances."

"A dramatic agent, passing through Lyons, engaged him and his menagerie for the Port Saint-Martin Theatre at a very high price. He says that he did not like to refuse such an offer."

"Well," said Father d'Aigrigny, shrugging his shoulders, "but by distributing his little books, and selling prints and chaplets, as well as by the influence he would certainly exercise over the pious and ignorant people of the South or of Brittany, he might render services, such as he can never perform in Paris."

"He is now below, with a kind of giant, who travels about with him. In his capacity of your reverence's old servant, Morok hoped to have the honor of kissing your hand this evening."

"Impossible—impossible—you know how much I am occupied. Have you sent to the Rue Saint-Francois?"

"Yes, I have. The old Jew guardian has had notice from the notary. To morrow, at six in the morning, the masons will unwall the door, and, for the first time since one hundred and fifty years, the house will be opened."

Father d'Aigrigny remained in thought for a moment, and then said to Rodin: "On the eve of such a decisive day, we must neglect nothing, and call every circumstance to memory. Read me the copy of the note, inserted in the archives of the society, a century and a half ago, on the subject of Rennepont."

The secretary took the note from the case, and read as follows:

"'This 19th day of February, 1682, the Reverend Father-Provincial Alexander Bourdon sent the following advice, with these words in the margin: Of extreme importance for the future.

"'We have just discovered, by the confession of a dying person to one of our fathers, a very close secret....