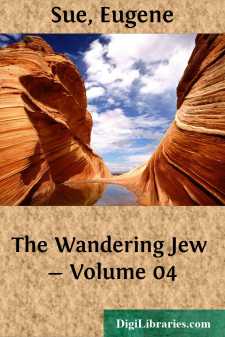 As the eagle, perched upon the cliff, commands an all-comprehensive view—not only of what happens on the plains and in the woodlands, but of matters occurring upon the heights, which its aerie overlooks, so may the reader have sights pointed out to him, which lie below the level of the unassisted eye.

In the year 1831, the powerful Order of the Jesuits saw fit to begin to act upon information which had for some time been digesting in their hands.

As it related to a sum estimated at no less than thirty or forty millions of francs, it is no wonder that they should redouble all exertions to obtain it from the rightful owners.

These were, presumably, the descendants of Marius, Count of Rennepont, in the reign of Louis XIV. of France.

They were distinguished from other men by a simple token, which all, in the year above named, had in their hands.

It was a bronze medal, bearing these legends on reverse and obverse:

Those who had this token were descendants of a family whom, a hundred and fifty years ago, persecution scattered through the world, in emigration and exile; in changes of religion, fortune and name. For this family—what grandeur, what reverses, what obscurity, what lustre, what penury, what glory! How many crimes sullied, how many virtues honored it! The history of this single family is the history of humanity! Passing through many generations, throbbing in the veins of the poor and the rich, the sovereign and the bandit, the wise and the simple, the coward and the brave, the saint and the atheist, the blood flowed on to the year we have named.

Seven representatives summed up the virtue, courage, degradation, splendor, and poverty of the race. Seven: two orphan twin daughters of exiled parents, a dethroned prince, a humble missionary priest, a man of the middle class, a young lady of high name and large fortune, and a working man.

Fate scattered them in Russia, India, France, and America.

The orphans, Rose and Blanche Simon, had left their dead mother's grave in Siberia, under charge of a trooper named Francis Baudoin, alias Dagobert, who was as much attached to them as he had been devoted to their father, his commanding general.

On the road to France, this little party had met the first check, in the only tavern of Mockern village. Not only had a wild beast showman, known as Morok the lion-tamer, sought to pick a quarrel with the inoffensive veteran, but that failing, had let a panther of his menagerie loose upon the soldier's horse....