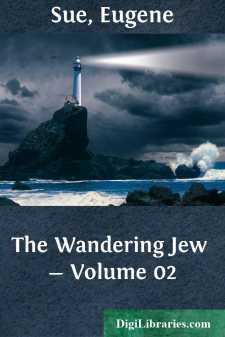 The site is wild and rugged. It is a lofty eminence covered with huge boulders of sandstone, between which rise birch trees and oaks, their foliage already yellowed by autumn. These tall trees stand out from the background of red light, which the sun has left in the west, resembling the reflection of a great fire.

From this eminence the eye looks down into a deep valley, shady, fertile, and half-veiled in light vapor by the evening mist. The rich meadows, the tufts of bushy trees the fields from which the ripe corn has been gathered in, all blend together in one dark, uniform tint, which contrasts with the limpid azure of the heavens. Steeples of gray stone or slate lift their pointed spires, at intervals, from the midst of this valley; for many villages are spread about it, bordering a high-road which leads from the north to the west.

It is the hour of repose—the hour when, for the most part, every cottage window brightens to the joyous crackling of the rustic hearth, and shines afar through shade and foliage, whilst clouds of smoke issue from the chimneys, and curl up slowly towards the sky. But now, strange to say, every hearth in the country seems cold and deserted. Stranger and more fatal still, every steeple rings out a funeral knell. Whatever there is of activity, movement, or life, appears concentrated in that lugubrious and far-sounding vibration.

Lights begin to show themselves in the dark villages, but they rise not from the cheerful and pleasant rustic hearth. They are as red as the fires of the herdsmen, seen at night through the midst of the fog. And then these lights do not remain motionless. They creep slowly towards the churchyard of every village. Louder sounds the death-knell, the air trembles beneath the strokes of so many bells, and, at rare intervals, the funeral chant rises faintly to the summit of the hill.

Why so many interments? What valley of desolation is this, where the peaceful songs which follow the hard labors of the day are replaced by the death dirge? where the repose of evening is exchanged for the repose of eternity? What is this valley of the shadow, where every village mourns for its many dead, and buries them at the same hour of the same night?

Alas! the deaths are so sudden and numerous and frightful that there is hardly time to bury the dead. During day the survivors are chained to the earth by hard but necessary toil; and only in the evening, when they return from the fields, are they able, though sinking with fatigue, to dig those other furrows, in which their brethren are to lie heaped like grains of corn.

And this valley is not the only one that has seen the desolation. During a series of fatal years, many villages, many towns, many cities, many great countries, have seen, like this valley, their hearths deserted and cold—have seen, like this valley, mourning take the place of joy, and the death-knell substituted for the noise of festival—have wept in the same day for their many dead, and buried them at night by the lurid glare of torches....