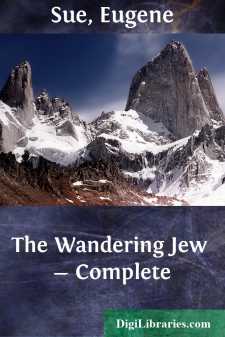 The Land's End of Two Worlds.

The Arctic Ocean encircles with a belt of eternal ice the desert confines of Siberia and North America—the uttermost limits of the Old and New worlds, separated by the narrow, channel, known as Behring's Straits.

The last days of September have arrived.

The equinox has brought with it darkness and Northern storms, and night will quickly close the short and dismal polar day. The sky of a dull and leaden blue is faintly lighted by a sun without warmth, whose white disk, scarcely seen above the horizon, pales before the dazzling, brilliancy of the snow that covers, as far as the eyes can reach, the boundless steppes.

To the North, this desert is bounded by a ragged coast, bristling with huge black rocks.

At the base of this Titanic mass lied enchained the petrified ocean, whose spell-bound waves appear fired as vast ranges of ice mountains, their blue peaks fading away in the far-off frost smoke, or snow vapor.

Between the twin-peaks of Cape East, the termination of Siberia, the sullen sea is seen to drive tall icebergs across a streak of dead green. There lies Behring's Straits.

Opposite, and towering over the channel, rise the granite masses of Cape Prince of Wales, the headland of North America.

These lonely latitudes do not belong to the habitable world; for the piercing cold shivers the stones, splits the trees, and causes the earth to burst asunder, which, throwing forth showers of icy spangles seems capable of enduring this solitude of frost and tempest, of famine and death.

And yet, strange to say, footprints may be traced on the snow, covering these headlands on either side of Behring's Straits.

On the American shore, the footprints are small and light, thus betraying the passage of a woman.

She has been hastening up the rocky peak, whence the drifts of Siberia are visible.

On the latter ground, footprints larger and deeper betoken the passing of a man. He also was on his way to the Straits.

It would seem that this man and woman had arrived here from opposite directions, in hope of catching a glimpse of one another, across the arm of the sea dividing the two worlds—the Old and the New.

More strange still! the man and the woman have crossed the solitudes during a terrific storm! Black pines, the growth of centuries, pointing their bent heads in different parts of the solitude like crosses in a churchyard, have been uprooted, rent, and hurled aside by the blasts!

Yet the two travellers face this furious tempest, which has plucked up trees, and pounded the frozen masses into splinters, with the roar of thunder.

They face it, without for one single instant deviating from the straight line hitherto followed by them.

Who then are these two beings who advance thus calmly amidst the storms and convulsions of nature?

Is it by chance, or design, or destiny, that the seven nails in the sole of the man's shoe form a cross—thus:

Everywhere he leaves this impress behind him.

On the smooth and polished snow, these footmarks seem imprinted by a foot of brass on a marble floor....