The Voyage of Captain Popanilla 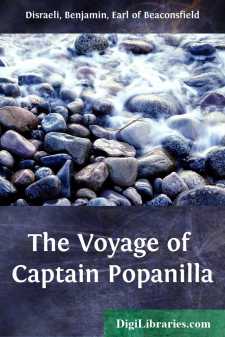 There is an island in the Indian Ocean, so unfortunate as not yet to have been visited either by Discovery Ships or Missionary Societies. It is a place where all those things are constantly found which men most desire to see, and with the sight of which they are seldom favoured. It abounds in flowers, and fruit, and sunshine. Lofty mountains, covered with green and mighty forests, except where the red rocks catch the fierce beams of the blazing sun, bowery valleys, broad lakes, gigantic trees, and gushing rivers bursting from rocky gorges, are crowned with a purple and ever cloudless sky. Summer, in its most unctuous state and most mellow majesty, is here perpetual. So intense and overpowering, in the daytime, is the rich union of heat and perfume, that living animal or creature is never visible; and were you and I to pluck, before sunset, the huge fruit from yonder teeming tree, we might fancy ourselves for the moment the future sinners of another Eden. Yet a solitude it is not.

The island is surrounded by a calm and blue lagoon, formed by a ridge of coral rocks, which break the swell of the ocean, and prevent the noxious spray from banishing the rich shrubs which grow even to the water's edge. It is a few minutes before sunset, that the first intimation of animal existence in this seeming solitude is given, by the appearance of mermaids; who, floating on the rosy sea, congregate about these rocks. They sound a loud but melodious chorus from their sea-shells, and a faint and distant chorus soon answers from the island. The mermaidens immediately repeat their salutations, and are greeted with a nearer and a louder answer. As the red and rayless sun drops into the glowing waters, the choruses simultaneously join; and rushing from the woods, and down the mountain steeps to the nearest shore, crowds of human beings, at the same moment, appear and collect.

The inhabitants of this island, in form and face, do not misbecome the clime and the country. With the vivacity of a Faun, the men combine the strength of a Hercules and the beauty of an Adonis; and, as their more interesting companions flash upon his presence, the least classical of poets might be excused for imagining that, like their blessed Goddess, the women had magically sprung from the brilliant foam of that ocean which is gradually subsiding before them.

But sunset in this land is not the signal merely for the evidence of human existence. At the moment that the Islanders, crowned with flowers, and waving goblets and garlands, burst from their retreats, upon each mountain peak a lion starts forward, stretches his proud tail, and, bellowing to the sun, scours back exulting to his forest; immense bodies, which before would have been mistaken for the trunks of trees, now move into life, and serpents, untwining their green and glittering folds, and slowly bending their crested heads around, seem proudly conscious of a voluptuous existence; troops of monkeys leap from tree to tree; panthers start forward, and alarmed, not alarming, instantly vanish; a herd of milk-white elephants tramples over the back-ground of the scene; and instead of gloomy owls and noxious beetles, to hail the long-enduring twilight, from the bell of every opening flower beautiful birds, radiant with every rainbow tint, rush with a long and living melody into the cool air....