The Voice Its Production, Care and Preservation 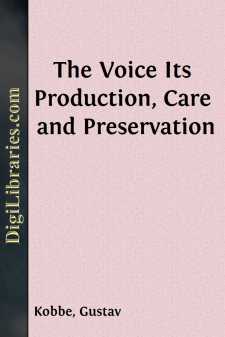 CHAPTER I A RATIONAL VOCAL METHOD

The proper physiological basis for a singing method having been laid, something else, something highly important, remains to be superimposed. Voice is physical. But everything that colors voice, charging it with emotion, giving it its peculiar quality and making it different from other voices, is largely, although not wholly, the result of a psychical control—a control not exercised mysteriously from without, like Svengali's over Trilby, but by the singer himself from within. Every singer is his own mesmerist, or he has mistaken his vocation. For while voice is a physical manifestation, its "atmosphere," its emotional thrill and charm, is a psychical one—the result of the individual's thought and feeling, acting unconsciously or, better still, subconsciously, on that physical thing, the voice.

Between the two, however, between mind and body, there lies, like a borderland of fancy, yet most real, the nervous system, crossed and recrossed by the most delicate, the most sensitive filaments ever spun, filaments that touch, caress, or permeate each and every muscle concerned in voice-production, calling them into play with the rapidity of mental telegraphy. Over this network of nerves the mind, or—if you prefer to call it so—the artistic sense, sends its messages, and it is the nerves and muscles working in harmony that results in a correct production of the voice. So important, indeed, is the coöperation of the nervous system, that it is a question whether the whole psychology of song may not be referred to it—whether the degree of emotional thrill, in different voices, may not be the result of greater or less sensitiveness in the nervous system of different singers. This might explain why some very beautiful voices lack emotional quality. In such singers the physical action of the vocal organs and of all the resonance cavities of the head may be perfect, but the nerves are not sufficiently sensitive to the emotion which the song is intended to express, and so fail to carry it to the voice.

Immense progress has been made in anatomical research, and in no other branch more than in the study of the throat and of the larynx, which is the voice-box of the human body. There also has been a great advance in the study of metaphysics. It would seem high time, therefore, that both the results of modern anatomical study and the deductions of advanced psychological research, should be recognized in the use of that subtle and beautiful thing, the human voice, which in its ultimate quality is a combination of physiological and psychological phenomena—the physical, voice-producing organs acting within and for themselves, but also being acted upon by a series of suggestive impulses from the mind and soul, countless in number and variety. Indeed, one might say that while in singing the vocal organs are the first essential, they must, in order to achieve their full effect, be in tune with the infinite. Artistic singing involves complete physiological control of the voice-producing function, combined with complete command of the metaphysical resources of art. Thus only can voice be produced with that apparent spontaneity which we call artistic, and at the same time be charged with the emotional quality which gives it individual significance.

These two factors of voice-production, the physical and the psychical, should be recognized both by the teacher and by the student in striving to develop the voice, and by the physician who seeks to restore an impaired voice to its pristine quality. The substitution by teachers of various methods, originated by themselves, for the natural physiological method to which the vocal organs become self-adjusted and for the correct processes of auto-suggestion originating within the well-taught singer himself, is the cause of most ruined voices....