The Vizier of the Two-Horned Alexander 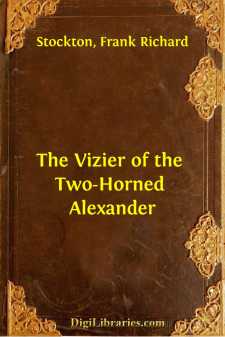 I was on a French steamer bound from Havre to New York, when I had a peculiar experience in the way of a shipwreck. On a dark and foggy night, when we were about three days out, our vessel collided with a derelict--a great, heavy, helpless mass, as dull and colorless as the darkness in which she was enveloped. We struck her almost head on, and her stump of a bowsprit was driven into our port bow with such tremendous violence that a great hole--nobody knew of what dimensions--was made in our vessel.

The collision occurred about two hours before daylight, and the frightened passengers who crowded the upper deck were soon informed by the officers that it would be necessary to take to the boats, for the vessel was rapidly settling by the head.

Now, of course, all was hurry and confusion. The captain endeavored to assure his passengers that there were boats enough to carry every soul on board, and that there was time enough for them to embark quietly and in order. But as the French people did not understand him when he spoke in English, and as the Americans did not readily comprehend what he said in French, his exhortations were of little avail. With such of their possessions as they could carry, the people crowded into the boats as soon as they were ready, and sometimes before they were ready; and while there was not exactly a panic on board, each man seemed to be inspired with the idea that his safety, and that of his family, if he had one, depended upon precipitate individual action.

I was a young man, traveling alone, and while I was as anxious as any one to be saved from the sinking vessel, I was not a coward, and I could not thrust myself into a boat when there were women and children behind me who had not yet been provided with places. There were men who did this, and several times I felt inclined to knock one of the poltroons overboard. The deck was well lighted, the steamer was settling slowly, and there was no excuse for the dastardly proceedings which were going on about me.

It was not long, however, before almost all of the passengers were safely embarked, and I was preparing to get into a boat which was nearly filled with the officers and crew, when I was touched on the shoulder, and turning, I saw a gentleman whose acquaintance I had made soon after the steamer had left Havre. His name was Crowder. He was a middle-aged man, a New-Yorker, intelligent and of a social disposition, and I had found him a very pleasant companion. To my amazement, I perceived that he was smoking a cigar.

"If I were you," said he, "I would not go in that boat. It is horribly crowded, and the captain and second officer have yet to find places in it."

"That's all the more reason," said I, "why we should hurry. I am not going to push myself ahead of women and children, but I've just as much right to be saved as the captain has, and if there are any vacant places, let us get them as soon as possible."

Crowder now put his hand on my shoulder as if to restrain me. "Safety!" said he....