The Visits of Elizabeth 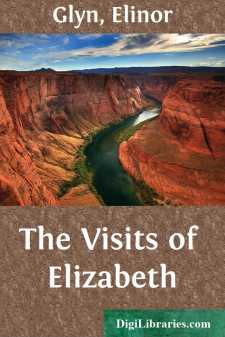 It was perhaps a fortunate thing for Elizabeth that her ancestors went back to the Conquest, and that she numbered at least two Countesses and a Duchess among her relatives. Her father had died some years ago, and, her mother being an invalid, she had lived a good deal abroad. But, at about seventeen, Elizabeth began to pay visits among her kinsfolk. It was after arriving at Nazeby Hall, for a Cricket Week, that she first wrote home.

Dearest Mamma,—I got here all right, without even a smut on my face, for Agnès tidied me up in the brougham before we arrived at the gate. The dust in the train was horrid. It is a nice house. They were at tea when I was ushered in; it was in the hall—I suppose it was because it was so windy outside. There seemed to be a lot of people there; and they all stopped talking suddenly, and stared at me as if I were a new thing in the Zoo, and then, after a minute, went on with their conversations at the point they had left off.

Lady Cecilia pecked my cheek, and gave me two fingers; and asked me, in a voice right up at the top, how were you. I said you were better, and—you know what you told me to say. She murmured something while she was listening to what a woman with a sweet frock and green eyes was saying at the other end of the table. There was heaps of tea. She waved vaguely for me to sit down, which I did; but there was a footstool near, and it was half dark, so I fell over that, but not very badly, and got safely to my seat.

Lady Cecilia—continuing her conversation across the room all the time—poured out a cup of tea, with lumps and lumps of sugar in it, and lots of cream, just what you would give to a child for a treat! and she handed it to me, but I said, "Oh! please, Lady Cecilia, I don't take sugar!" She has such bulgy eyes, and she opened them wide at me, perfectly astonished, and said, "Oh! then please ring the bell; I don't believe there is another clean cup." Everybody stopped talking again, and looked at me, and the green-eyed lady giggled—and I rang the bell, and this time didn't fall over anything, and so presently I got some tea. Just as I was enjoying such a nice cake, and watching all the people, quite a decent man came up and sat down behind me. Lady Cecilia had not introduced me to anybody, and he said, "Have you come a long way?" And I said, "Yes." And he said, "It must have been dusty in the train," and I said it was—and he was beginning to say something more, when the woman with the green eyes said, "Harry, do hand me the cucumber sandwiches," and so he had to get up, and just then Sir Trevor came in, and he was glad to see me. He is a jolly soul, and he said I was eight when he last saw me, and seemed quite surprised I had grown any taller since! Just as though people could stay at eight! Then he patted my cheek, and said, "You're a beauty, Elizabeth," and Lady Cecilia's eyes bulged at him a good deal, and she said to me, "Wouldn't you like to see your room?" and I said I wasn't a bit in a hurry, but she took me off, and here I am; and I am going to wear my pink silk for dinner, and will finish this by-and-by....