The Vision of the Fountain (From "Twice Told Tales") 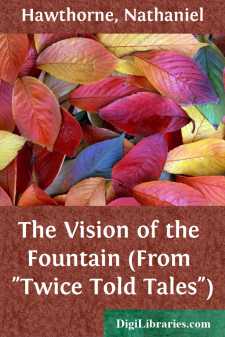 At fifteen, I became a resident in a country village, more than a hundred miles from home. The morning after my arrival—a September morning, but warm and bright as any in July—I rambled into a wood of oaks, with a few walnut-trees intermixed, forming the closest shade above my head. The ground was rocky, uneven, overgrown with bushes and clumps of young saplings, and traversed only by cattle-paths. The track, which I chanced to follow, led me to a crystal spring, with a border of grass, as freshly green as on May morning, and overshadowed by the limb of a great oak. One solitary sunbeam found its way down, and played like a goldfish in the water.

From my childhood, I have loved to gaze into a spring. The water filled a circular basin, small but deep, and set round with stones, some of which were covered with slimy moss, the others naked, and of variegated hue, reddish, white, and brown. The bottom was covered with coarse sand, which sparkled in the lonely sunbeam, and seemed to illuminate the spring with an unborrowed light. In one spot, the gush of the water violently agitated the sand, but without obscuring the fountain, or breaking the glassiness of its surface. It appeared as if some living creature were about to emerge—the Naiad of the spring, perhaps—in the shape of a beautiful young woman, with a gown of filmy water-moss, a belt of rainbow-drops, and a cold, pure, passionless countenance. How would the beholder shiver, pleasantly, yet fearfully, to see her sitting on one of the stones, paddling her white feet in the ripples, and throwing up water, to sparkle in the sun! Wherever she laid her hands on grass and flowers, they would immediately be moist, as with morning dew. Then would she set about her labors, like a careful housewife, to clear the fountain of withered leaves, and bits of slimy wood, and old acorns from the oaks above, and grains of corn left by cattle in drinking, till the bright sand, in the bright water, were like a treasury of diamonds. But, should the intruder approach too near, he would find only the drops of a summer shower glistening about the spot where he had seen her.

Reclining on the border of grass, where the dewy goddess should have been, I bent forward, and a pair of eyes met mine within the watery mirror. They were the reflection of my own. I looked again, and lo! another face, deeper in the fountain than my own image, more distinct in all the features, yet faint as thought. The vision had the aspect of a fair young girl, with locks of paly gold. A mirthful expression laughed in the eyes and dimpled over the whole shadowy countenance, till it seemed just what a fountain would be, if, while dancing merrily into the sunshine, it should assume the shape of woman. Through the dim rosiness of the cheeks, I could see the brown leaves, the slimy twigs, the acorns, and the sparkling sand. The solitary sunbeam was diffused among the golden hair, which melted into its faint brightness, and became a glory round that head so beautiful!

My description can give no idea how suddenly the fountain was thus tenanted, and how soon it was left desolate. I breathed; and there was the face! I held my breath; and it was gone! Had it passed away, or faded into nothing? I doubted whether it had ever been.

My sweet readers, what a dreamy and delicious hour did I spend, where that vision found and left me! For a long time I sat perfectly still, waiting till it should reappear, and fearful that the slightest motion, or even the flutter of my breath, might frighten it away. Thus have I often started from a pleasant dream, and then kept quiet, in hopes to wile it back. Deep were my musings, as to the race and attributes of that ethereal being....