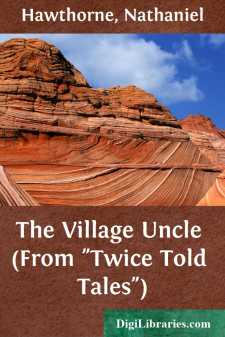 Come! another log upon the hearth. True, our little parlor is comfortable, especially here, where the old man sits in his old arm-chair; but on Thanksgiving night the blaze should dance high up the chimney, and send a shower of sparks into the outer darkness. Toss on an armful of those dry oak chips, the last relics of the Mermaid's knee-timbers, the bones of your namesake, Susan. Higher yet, and clearer be the blaze, till our cottage windows glow the ruddiest in the village, and the light of our household mirth flash far across the bay to Nahant. And now, come, Susan, come, my children, draw your chairs round me, all of you. There is a dimness over your figures! You sit quivering indistinctly with each motion of the blaze, which eddies about you like a flood, so that you all have the look of visions, or people that dwell only in the fire light, and will vanish from existence, as completely as your own shadows, when the flame shall sink among the embers. Hark! let me listen for the swell of the surf; it should be audible a mile inland, on a night like this. Yes; there I catch the sound, but only an uncertain murmur, as if a good way down over the beach; though, by the almanac, it is high tide at eight o'clock, and the billows must now be dashing within thirty yards of our door. Ah! the old man's ears are failing him; and so is his eyesight, and perhaps his mind; else you would not all be so shadowy, in the blaze of his Thanksgiving fire.

How strangely the Past is peeping over the shoulders of the Present! To judge by my recollections, it is but a few moments since I sat in another room; yonder model of a vessel was not there, nor the old chest of drawers, nor Susan's profile and mine, in that gilt frame; nothing, in short, except this same fire, which glimmered on books, papers, and a picture, and half discovered my solitary figure in a looking-glass. But it was paler than my rugged old self, and younger, too, by almost half a century. Speak to me, Susan; speak, my beloved ones; for the scene is glimmering on my sight again, and as it brightens you fade away. O, I should be loath to lose my treasure of past happiness, and become once more what I was then; a hermit in the depths of my own mind; sometimes yawning over drowsy volumes, and anon a scribbler of wearier trash than what I read; a man who had wandered out of the real world and got into its shadow, where his troubles, joys, and vicissitudes were of such slight stuff, that he hardly knew whether he lived, or only dreamed of living. Thank Heaven, I am an old man now, and have done with all such vanities!

Still this dimness of mine eyes! Come nearer, Susan, and stand before the fullest blaze of the hearth. Now I behold you illuminated from head to foot, in your clean cap and decent gown, with the dear lock of gray hair across your forehead, and a quiet smile about your mouth, while the eyes alone are concealed, by the red gleam of the fire upon your spectacles. There, you made me tremble again! When the flame quivered, my sweet Susan, you quivered with it, and grew indistinct, as if melting into the warm light, that my last glimpse of you might be as visionary as the first was, full many a year since. Do you remember it? You stood on the little bridge, over the brook, that runs across King's Beach into the sea. It was twilight; the waves rolling in, the wind sweeping by, the crimson clouds fading in the west, and the silver moon brightening above the hill; and on the bridge were you, fluttering in the breeze like a sea-bird that might skim away at your pleasure. You seemed a daughter of the viewless wind, a creature of the ocean foam and the crimson light, whose merry life was spent in dancing on the crests of the billows, that threw up their spray to support your footsteps. As I drew nearer, I fancied you akin to the race of mermaids, and thought how pleasant it would be to dwell with you among the quiet coves, in the shadow of the cliffs, and to roam along secluded beaches of the purest sand, and when our northern shores grew bleak, to haunt the islands, green and lonely, far amid summer seas. And yet it gladdened me, after all this nonsense, to find you nothing but a pretty young girl, sadly perplexed with the rude behavior of the wind about your petticoats.

Thus I did with Susan as with most other things in my earlier days, dipping her image into my mind and coloring it of a thousand fantastic hues, before I could see her as she really was....