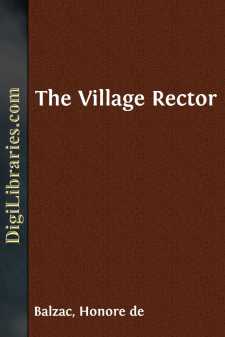 In the lower town of Limoges, at the corner of the rue de la Vieille-Poste and the rue de la Cite might have been seen, a generation ago, one of those shops which were scarcely changed from the period of the middle-ages. Large tiles seamed with a thousand cracks lay on the soil itself, which was damp in places, and would have tripped up those who failed to observe the hollows and ridges of this singular flooring. The dusty walls exhibited a curious mosaic of wood and brick, stones and iron, welded together with a solidity due to time, possibly to chance. For more than a hundred years the ceiling, formed of colossal beams, bent beneath the weight of the upper stories, though it had never given way under them. Built en colombage, that is to say, with a wooden frontage, the whole facade was covered with slates, so put on as to form geometrical figures,—thus preserving a naive image of the burgher habitations of the olden time.

None of the windows, cased in wood and formerly adorned with carvings, now destroyed by the action of the weather, had continued plumb; some bobbed forward, others tipped backward, while a few seemed disposed to fall apart; all had a compost of earth, brought from heaven knows where, in the nooks and crannies hollowed by the rain, in which the spring-tide brought forth fragile flowers, timid creeping plants, and sparse herbage. Moss carpeted the roof and draped its supports. The corner pillar, with its composite masonry of stone blocks mingled with brick and pebbles, was alarming to the eye by reason of its curvature; it seemed on the point of giving way under the weight of the house, the gable of which overhung it by at least half a foot. The municipal authorities and the commissioner of highways did, eventually, pull the old building down, after buying it, to enlarge the square.

The pillar we have mentioned, placed at the angle of two streets, was a treasure to the seekers for Limousin antiquities, on account of its lovely sculptured niche in which was a Virgin, mutilated during the Revolution. All visitors with archaeological proclivities found traces of the stone sockets used to hold the candelabra in which public piety lighted tapers or placed its ex-votos and flowers.

At the farther end of the shop, a worm-eaten wooden staircase led to the two upper floors which were in turn surmounted by an attic. The house, backing against two adjoining houses, had no depth and derived all its light from the front and side windows. Each floor had two small chambers only, lighted by single windows, one looking out on the rue de la Cite, the other on the rue de la Vieille-Poste.

In the middle-ages no artisan was better lodged. The house had evidently belonged in those times to makers of halberds and battle-axes, armorers in short, artificers whose work was not injured by exposure to the open air; for it was impossible to see clearly within, unless the iron shutters were raised from each side of the building; where were also two doors, one on either side of the corner pillar, as may be seen in many shops at the corners of streets....