The Vicar of Tours 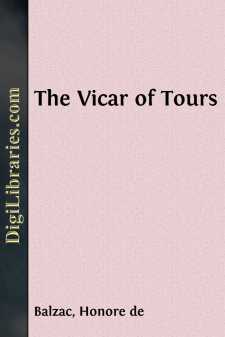 Early in the autumn of 1826 the Abbe Birotteau, the principal personage of this history, was overtaken by a shower of rain as he returned home from a friend's house, where he had been passing the evening. He therefore crossed, as quickly as his corpulence would allow, the deserted little square called "The Cloister," which lies directly behind the chancel of the cathedral of Saint-Gatien at Tours.

The Abbe Birotteau, a short little man, apoplectic in constitution and about sixty years old, had already gone through several attacks of gout. Now, among the petty miseries of human life the one for which the worthy priest felt the deepest aversion was the sudden sprinkling of his shoes, adorned with silver buckles, and the wetting of their soles. Notwithstanding the woollen socks in which at all seasons he enveloped his feet with the extreme care that ecclesiastics take of themselves, he was apt at such times to get them a little damp, and the next day gout was sure to give him certain infallible proofs of constancy. Nevertheless, as the pavement of the Cloister was likely to be dry, and as the abbe had won three francs ten sous in his rubber with Madame de Listomere, he bore the rain resignedly from the middle of the place de l'Archeveche, where it began to come down in earnest. Besides, he was fondling his chimera,—a desire already twelve years old, the desire of a priest, a desire formed anew every evening and now, apparently, very near accomplishment; in short, he had wrapped himself so completely in the fur cape of a canon that he did not feel the inclemency of the weather. During the evening several of the company who habitually gathered at Madame de Listomere's had almost guaranteed to him his nomination to the office of canon (then vacant in the metropolitan Chapter of Saint-Gatien), assuring him that no one deserved such promotion as he, whose rights, long overlooked, were indisputable.

If he had lost the rubber, if he had heard that his rival, the Abbe Poirel, was named canon, the worthy man would have thought the rain extremely chilling; he might even have thought ill of life. But it so chanced that he was in one of those rare moments when happy inward sensations make a man oblivious of discomfort. In hastening his steps he obeyed a more mechanical impulse, and truth (so essential in a history of manners and morals) compels us to say that he was thinking of neither rain nor gout.

In former days there was in the Cloister, on the side towards the Grand'Rue, a cluster of houses forming a Close and belonging to the cathedral, where several of the dignitaries of the Chapter lived. After the confiscation of ecclesiastical property the town had turned the passage through this close into a narrow street, called the Rue de la Psalette, by which pedestrians passed from the Cloister to the Grand'Rue. The name of this street, proves clearly enough that the precentor and his pupils and those connected with the choir formerly lived there. The other side, the left side, of the street is occupied by a single house, the walls of which are overshadowed by the buttresses of Saint-Gatien, which have their base in the narrow little garden of the house, leaving it doubtful whether the cathedral was built before or after this venerable dwelling....