The Turtles of Tasman 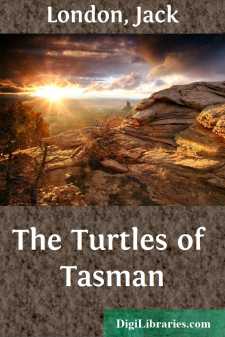 BY THE TURTLES OF TASMAN I

Law, order, and restraint had carved Frederick Travers' face. It was the strong, firm face of one used to power and who had used power with wisdom and discretion. Clean living had made the healthy skin, and the lines graved in it were honest lines. Hard and devoted work had left its wholesome handiwork, that was all. Every feature of the man told the same story, from the clear blue of the eyes to the full head of hair, light brown, touched with grey, and smoothly parted and drawn straight across above the strong-domed forehead. He was a seriously groomed man, and the light summer business suit no more than befitted his alert years, while it did not shout aloud that its possessor was likewise the possessor of numerous millions of dollars and property.

For Frederick Travers hated ostentation. The machine that waited outside for him under the porte-cochère was sober black. It was the most expensive machine in the county, yet he did not care to flaunt its price or horse-power in a red flare across the landscape, which also was mostly his, from the sand dunes and the everlasting beat of the Pacific breakers, across the fat bottomlands and upland pastures, to the far summits clad with redwood forest and wreathed in fog and cloud.

A rustle of skirts caused him to look over his shoulder. Just the faintest hint of irritation showed in his manner. Not that his daughter was the object, however. Whatever it was, it seemed to lie on the desk before him.

"What is that outlandish name again?" she asked. "I know I shall never remember it. See, I've brought a pad to write it down."

Her voice was low and cool, and she was a tall, well-formed, clear-skinned young woman. In her voice and complacence she, too, showed the drill-marks of order and restraint.

Frederick Travers scanned the signature of one of two letters on the desk. "Bronislawa Plaskoweitzkaia Travers," he read; then spelled the difficult first portion, letter by letter, while his daughter wrote it down.

"Now, Mary," he added, "remember Tom was always harum scarum, and you must make allowances for this daughter of his. Her very name is—ah—disconcerting. I haven't seen him for years, and as for her...." A shrug epitomised his apprehension. He smiled with an effort at wit. "Just the same, they're as much your family as mine. If he is my brother, he is your uncle. And if she's my niece, you're both cousins."

Mary nodded. "Don't worry, father. I'll be nice to her, poor thing. What nationality was her mother?—to get such an awful name."

"I don't know. Russian, or Polish, or Spanish, or something. It was just like Tom. She was an actress or singer—I don't remember. They met in Buenos Ayres. It was an elopement. Her husband—"

"Then she was already married!"

Mary's dismay was unfeigned and spontaneous, and her father's irritation grew more pronounced. He had not meant that. It had slipped out.

"There was a divorce afterward, of course. I never knew the details. Her mother died out in China—no; in Tasmania....