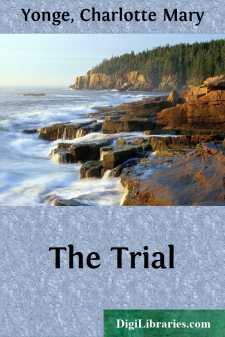 'Richard? That's right! Here's a tea-cup waiting for you,' as the almost thirty-year-old Incumbent of Cocksmoor, still looking like a young deacon, entered the room with his quiet step, and silent greeting to its four inmates.

'Thank you, Ethel. Is papa gone out?'

'I have not seen him since dinner-time. You said he was gone out with Dr. Spencer, Aubrey?'

'Yes, I heard Dr. Spencer's voice—"I say, Dick"—like three notes of consternation,' said Aubrey; 'and off they went. I fancy there's some illness about in the Lower Pond Buildings, that Dr. Spencer has been raging so long to get drained.'

'The knell has been ringing for a little child there,' added Mary; 'scarlatina, I believe—'

'But, Richard,' burst forth the merry voice of the youngest, 'you must see our letters from Edinburgh.'

'You have heard, then? It was the very thing I came to ask.'

'Oh yes! there were five notes in one cover,' said Gertrude. 'Papa says they are to be laid up in the family archives, and labelled "The Infants' Honeymoon."'

'Papa is very happy with his own share,' said Ethel. 'It was signed, "Still his own White Flower," and it had two Calton Hill real daisies in it. I don't know when I have seen him more pleased.'

'And Hector's letter—I can say that by heart,' continued Gertrude. '"My dear Father, This is only to say that she is the darlint, and for the pleasure of subscribing myself—Your loving SON,"—the son as big as all the rest put together.'

'I tell Blanche that he only took her for the pleasure of being my father's son,' said Aubrey, in his low lazy voice.

'Well,' said Mary, 'even to the last, I do believe he had as soon drive papa out as walk with Blanche. Flora was quite scandalized at it.'

'I should not imagine that George had often driven my father out,' said Aubrey, again looking lazily up from balancing his spoon.

Ethel laughed; and even Richard smiled; then recovering herself, she said, 'Poor Hector, he never could call himself son to any one before.'

'He has not been much otherwise here,' said Richard.

'No,' said Ethel; 'it is the peculiar hardship of our weddings to break us up by pairs, and carry off two instead of one. Did you ever see me with so shabby a row of tea-cups? When shall I have them come in riding double again?'

The recent wedding was the third in the family; the first after a five years' respite. It ensued upon an attachment that had grown up with the young people, so that they had been entirely one with each other; and there had been little of formal demand either of the maiden's affection or her father's consent; but both had been implied from the first. The bridegroom was barely of age, the bride not seventeen, and Dr. May had owned it was very shocking, and told Richard to say nothing about it! Hector had coaxed and pleaded, pathetically talked of his great empty house at Maplewood, and declared that till he might take Blanche away, he would not leave Stoneborough; he would bring down all sorts of gossip on his courtship, he would worry Ethel, and take care she finished nobody's education....