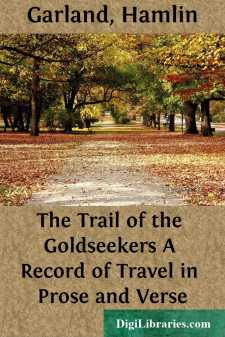 ANTICIPATION I will wash my brain in the splendid breeze,I will lay my cheek to the northern sun,I will drink the breath of the mossy trees,And the clouds shall meet me one by one.I will fling the scholar's pen aside,And grasp once more the bronco's rein,And I will ride and ride and ride,Till the rain is snow, and the seed is grain. The way is long and cold and lone—But I go.It leads where pines forever moanTheir weight of snow,Yet I go.There are voices in the wind that call,There are hands that beckon to the plain;I must journey where the trees grow tall,And the lonely heron clamors in the rain. Where the desert flames with furnace heat,I have trod.Where the horned toad's tiny feetIn a landOf burning sandLeave a mark,I have ridden in the noon and in the dark.Now I go to see the snows,Where the mossy mountains riseWild and bleak—and the roseAnd pink of morning fill the skiesWith a color that is singing,And the lightsOf polar nightsUtter criesAs they sweep from star to star,Swinging, ringing,Where the sunless middays are. THE TRAIL OF THE GOLDSEEKERS CHAPTER I COMING OF THE SHIPS I

A little over a year ago a small steamer swung to at a Seattle wharf, and emptied a flood of eager passengers upon the dock. It was an obscure craft, making infrequent trips round the Aleutian Islands (which form the farthest western point of the United States) to the mouth of a practically unknown river called the Yukon, which empties into the ocean near the post of St. Michaels, on the northwestern coast of Alaska.

The passengers on this boat were not distinguished citizens, nor fair to look upon. They were roughly dressed, and some of them were pale and worn as if with long sickness or exhausting toil. Yet this ship and these passengers startled the whole English-speaking world. Swift as electricity could fly, the magical word GOLD went forth like a brazen eagle across the continent to turn the faces of millions of earth's toilers toward a region which, up to that time, had been unknown or of ill report. For this ship contained a million dollars in gold: these seedy passengers carried great bags of nuggets and bottles of shining dust which they had burned, at risk of their lives, out of the perpetually frozen ground, so far in the north that the winter had no sun and the summer midnight had no dusk.

The world was instantly filled with the stories of these men and of their tons of bullion. There was a moment of arrested attention—then the listeners smiled and nodded knowingly to each other, and went about their daily affairs.

But other ships similarly laden crept laggardly through the gates of Puget Sound, bringing other miners with bags and bottles, and then the world believed. Thereafter the journals of all Christendom had to do with the "Klondike" and "The Golden River." Men could not hear enough or read enough of the mysterious Northwest.

In less than ten days after the landing of the second ship, all trains westward-bound across America were heavily laden with fiery-hearted adventurers, who set their faces to the new Eldorado with exultant confidence, resolute to do and dare.

Miners from Colorado and cow-boys from Montana met and mingled with civil engineers and tailors from New York City, and adventurous merchants from Chicago set shoulder to shoemakers from Lynn. All kinds and conditions of prospectors swarmed upon the boats at Seattle, Vancouver, and other coast cities. Some entered upon new routes to the gold fields, which were now known to be far in the Yukon Valley, while others took the already well-known route by way of St....