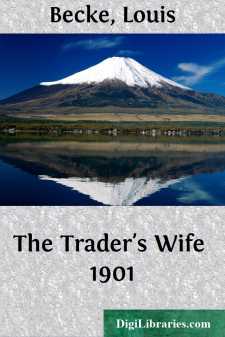 Brabant's wife was sitting on the shady verandah of her house on the hills overlooking Levuka harbour, and watching a large fore and aft schooner being towed in by two boats, for the wind had died away early in the morning and left the smooth sea to swelter and steam under a sky of brass.

The schooner was named the Maritana, and was owned and commanded by Mrs. Brabant's husband, John Brabant, who at that moment was standing on the after-deck looking through his glasses at the house on the hill, and at the white-robed figure of his wife.

"Can you see Mrs. Brabant, sir?" asked the chief mate, a short, dark-faced man of about thirty years of age, as he came aft and stood beside his captain.

"Yes, I can see her quite plainly, Lester," he replied, as he handed the glasses to his officer; "she is sitting on the verandah watching us."

The mate took the glasses and directed them upon the house for a few moments. "Perhaps she will come off to us, sir?"

Brabant shook his head. "It is a terribly hot day, you see, Lester, and she can't stand the sun at all. And then we shall be at anchor in another hour or so."

"Just so, sir," replied the mate politely. He did not like Mrs. Brabant, had never liked her from the very first day he saw her a year before, when Brabant had brought her down on board the Maritana in Auckland, and introduced her as his future wife. Why he did not like her he could not tell, and did not waste time in trying to analyse his feelings. He knew that his old friend and shipmate was passionately fond of his fair young wife, and was intensely proud of her beauty, and now, at the conclusion of a wearisome five months' voyage among the sun-baked islands of the Equatorial Pacific, was returning home more in love with her than ever. Not that he ever talked of her effusively, even to Lester, tried and true comrade as he was, for was naturally a self-contained and somewhat reserved man, as one could tell by his deep-set, stern grey eyes, and square jaw and chin.

"Damn her!" muttered Lester to himself, as he stood on the topgallant foc'scle watching the two boats with their toiling crews of brown-skinned natives; "nearly five months since she last saw him, and there she sits calmly watching us as if we had only sailed yesterday. Afraid of the sun! She's too selfish and too frightened of spoiling her pretty pink-and-white skin—that's what it is."

An hour later the boats came alongside, and then, as the chain rattled through the hawse-pipes, Brabant came on deck dressed in a suit of spotless white.

"Shall we see you this evening, Jim?" he asked, as he stood waiting to receive the Customs officer and doctor, whose boats were approaching.

"Thank you very much, sir, but I would rather stay on board this evening, as Dr. Bruce is sure to come into town some time to-day, as soon as he hears the Maritana is here, and I should not like to miss him."

"Just as you please, Jim. But why not take a run on shore with him, and both of you come up for an hour or two after dinner?"